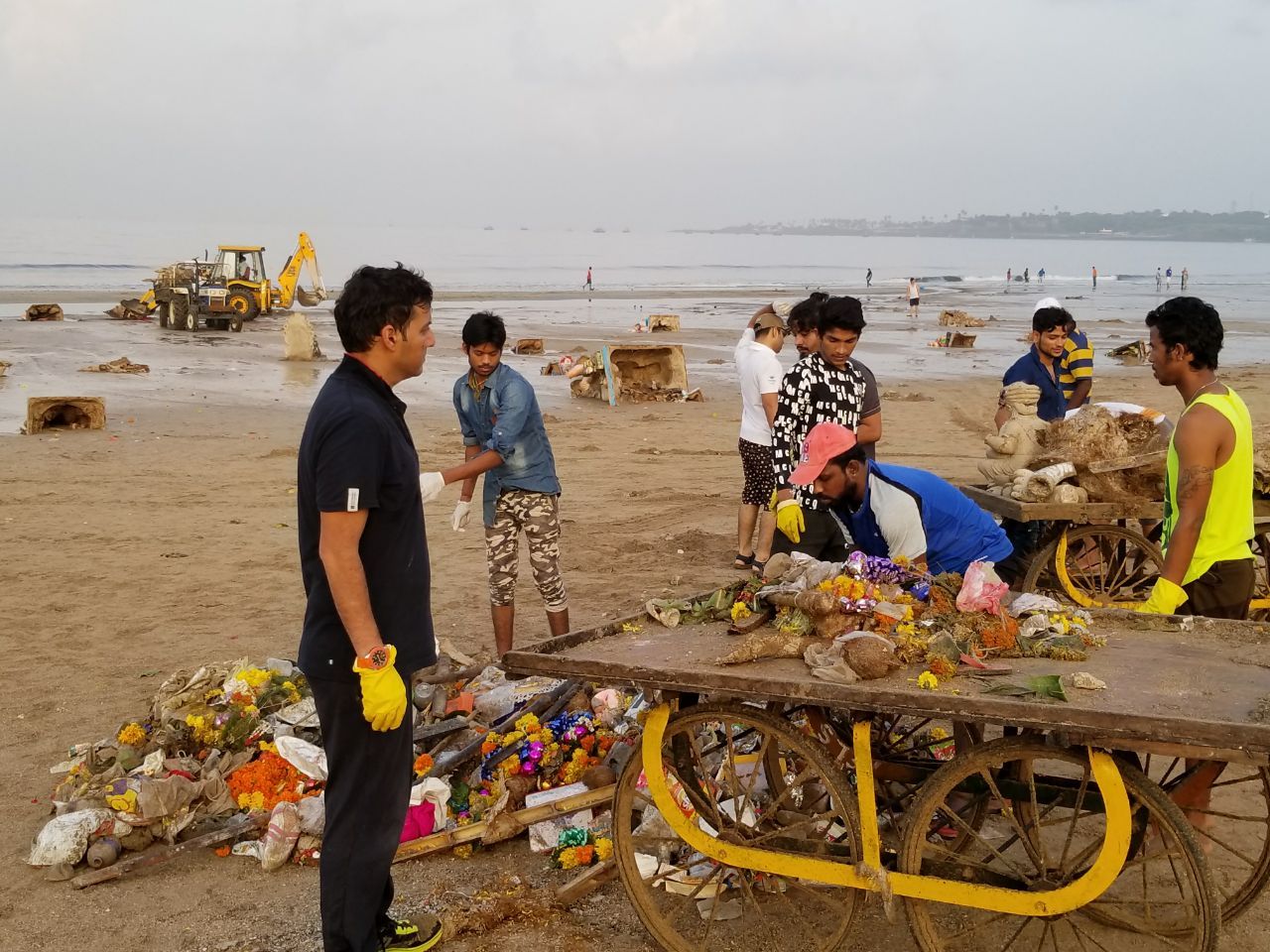 New Delhi: Every year, the morning after the final day of Ganpati immersion, streets and beaches of Mumbai are layered with tonnes of litter – from remains of the Ganpati idols, plastic, flowers to other waste items. Everything ended up polluting the city and its water bodies. But, this time the city painted a different picture as Mumbaikars and Bollywood celebrities joined hands with the 28,000 Brihanmumbai Municipal Corporation (BMC) workers to cleanup beaches and streets post the Ganesh Visarjan.

This year, around 2.15 lakh idols were immersed into the water bodies, out of which 40,572 Ganpati idols were immersed in 32 artificial ponds. Approximately 1,775 tonnes of floral waste and other material were collected post Ganesh Chaturthi celebrations across Mumbai and deposited at temporary collection centres.

Talking about what will happen to the floral waste which has been collected during Ganesh Chaturthi 2017, Vijay Khabale Patil, a spokesman for the BMC said, in coming days we aim to treat all this waste, the waste will be dispatched to five compost manure plants across the city and the manure produced will be used to make the city greener.

Mumbai Goes Chakachak, Thanks To These 2100 Swachh Warriors

Actress Dia Mirza along with Vivek Oberoi and 1200 volunteers took to cleaning up Mumbai’s popular Juhu beach. Together with volunteers, they removed more than 40,000 kilos of garbage from Juhu after the main day of Ganpati visarjan.

After the cleanup, Dia Mirza took to twitter and pledged to spread awareness among people about celebrating festivals the green way, she said, “Ganpati Bappa we pledge to ensure citizen awareness on hazards of using plaster of paris in making your idols. #BanPOP #SwachhBharat.”

Ganpati Bappa we pledge to ensure citizen awareness on hazards of using plaster of paris in making your idols. #BanPOP #SwachhBharat pic.twitter.com/aVpJyBYEQZ

She also added, Before we use/consume anything, we must ask, where is this coming from, where will it go? #WasteManagement #SwachhBharat #SayNoToPlastic.

Before we use/consume anything, we must ask, where is this coming from, where will it go? #WasteManagement #SwachhBharat #SayNoToPlastic pic.twitter.com/rdnENIuYQH

The beach crusader Afroz Shah and 41-year-old actor, Randeep Hooda along with 900 swachh volunteers which included over 500 students from various schools of Mumbai took over Versova Beach and cleaned up 80,000 kilos of garbage. They also picked up around 7,400 Ganesh idols made from Plaster of Paris which could have ended up polluting the beach all over again and for several years, since these idols are non-biodegradable.

This is the first time that mega cleanup activities were held across Mumbai covering major Ganpati Visarjan points with a simple agenda to save Mumbai from drowning in its own waste. But, the road to swachh Mumbai is still a long way away. Currently, even after all these efforts to keep the city clean is being made by the city’s civic body and its citizen, it seems Mumbai does not have a plan set for recycling the Ganpati idols which have been collected this year.