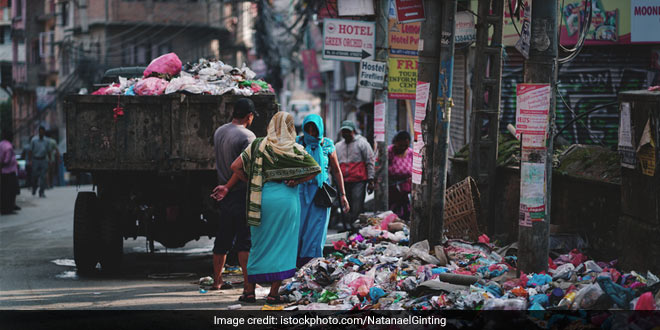 New Delhi: For residents of Nagpur and Jamshedpur it is time to say goodbye to all their waste disposal worries. Littered roads and overflowing bins can be a thing of the past and people can now be sure of their streets being swept and garbage being collected regularly. The Nagpur Municipal Corporation (NMC) and Jamshedpur Notified Area Committee (JMAC), which looks after the civic affairs of over 3 lakh people, are using GPS (global positioning system) to improve the existing methods of waste management under the Swachh Bharat Abhiyan.

Maharashtra’s Nagpur will soon have sanitary workers walking around the city with special wrist watches. In a bid to keep a track on civic worker’s daily activities the NMC has distributed GPS enabled watches to around 10 workers in Phase one. As part of their pilot project, workers in the Mangalwari zone will have to wear the watches when on-duty for next 15 days. And if the project yields satisfactory results with improved performance then the device will be distributed to other 7000 odd workers as well.

Being a rather new concept for us, the private company is presently giving demonstrations to officers in all our 10 zones. If the experiment works out then will extend the contract with the private firm and get watches for all our workers, says Pradeep Dasarwar, Medical Health Officer, NMC.

The watch which will approximately cost upto Rs 200 will send out information about a worker’s daily activities.

Details like, whether the worker is working in his designated area, attendance, how much of area gets cleaned, etc will be sent on our computer systems through the watches. Besides, the watch also has a telephonic feature which will enable the worker to directly contact his superior, Mr Dasarwar adds.

The move comes in after the NMC recorded an increase in the number of complaints in last six months says Mr Dasarwar, “With people now more active in Swachh Bharat Abhiyan activities, the awareness levels have increased. Instead of ignoring littering problems people are now coming forward and complaining about it. __ decided to integrate a strict check and balancing system which will help in reducing irregularities from

While Nagpur has adopted a more personalised route to monitor the sanitation activities, Jamshedpur has adopted a collective approach. The JMAC has installed GPS vehicle tracking system in about 25 garbage collecting vans.

These vehicle tracking devices will leave no scope for skipping any area of the JMAC. If any vehicle gives and colony or spot a miss, the device will immediately raise a red flag and we will get to know what area has been missed on what day without having to step outside the office, says a sanitary officer from JMAC.

This system will monitor vehicles on a daily basis and ensure that they carry out their duties efficiently. Around 70 tonnes of waste is generated daily in areas that fall under JNAC jurisdiction. The JNAC area is divided into three zones with four sanitary inspectors overseeing the cleaning work.