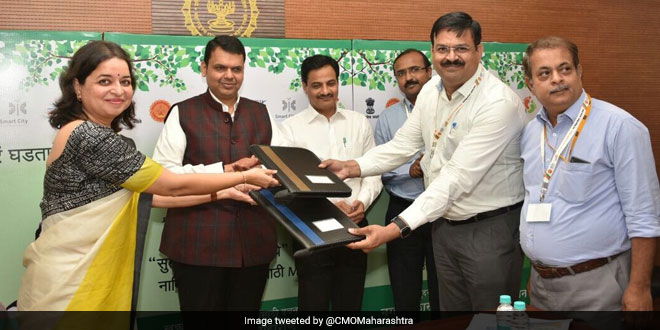 The struggle for water is universal across India and freshwater usage by industries has put significant pressure on water supply in Indian cities. Mumbai alone requires a daily water supply of over 4,200 million litres. Maharashtra government on November 1, sanctioned a policy, making it compulsory to recycle and reuse wastewater.

The policy, which was signed at the Mantralaya in Mumbai, in the presence of Chief Minister Devendra Fadnavis and Principal Secretary of Urban Development Manisha Mhaiskar, will ensure that industries in Maharashtra will no longer have to use freshwater. Maharashtra, which is one of the most industrialised states in India requires more than 6,000 million litres of water daily for its industries to function. Using wastewater for that purpose will help address much of the state’s water woes.

The municipal bodies in 71 areas will have three years to set up wastewater management plants. By 2020, the state government envisions to reuse at least 6,800 litres of wastewater daily from all urban cities and towns of the state. Other than industries, the wastewater could also be used in railways, ports and agriculture, in future. A wastewater treatment plant having capacity of treating 40 million litres daily (MLD) is already coming up in Navi Mumbai. Two similar treatment plants having capacity of 70 MLD and 40 MLD are to come up in Solapur and Chandrapur. To facilitate the construction of these plants, both public and private funding options have been approved by the government.

The plans to set up wastewater treatment plans are already underway with three constructions. We are hopeful that by 2020, at least five such plants will be fully functional across Maharashtra and reduce industrial dependence on freshwater, said Ms Mhaiskar.

Water has been a crucial issue in the state, as droughts and lack of availability of water has resulted in several controversies. Consistent droughts are a regularity in the state as lakes, wells and ponds dry up during the summer. Droughts have also resulted in several farmer deaths, with more than 3,200 farmers committing suicide in 2015 A policy like wastewater recycling could see change of fortune for the state’s water usage policies, and allow the government to redirect freshwater towards those who need them.

The policy will definitely be tremendously helpful as a heavily industrialised state like Maharashtra will uses a lot of freshwater. If industries use treated wastewater for their functioning, freshwater supply can be directed towards drought hit and other necessary areas. But the policy will only be wholly implemented by 2020, so its success or failure can only be determined three years from now, said Dr Sanjay Belsare, Executive Engineer, Water Resources Department, Maharashtra Engineering Training Academy.