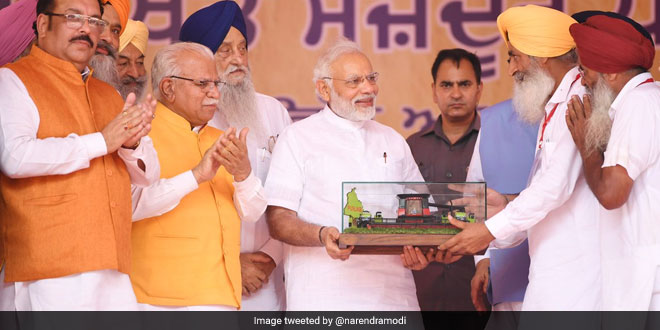 New Delhi: Prime Minister Narendra Modi expresses serious concern about the problem of stubble burning, and said that the Centre is working hard to ensure that farmers are not compelled to burn agricultural residue. The Prime Minister was speaking at a rally for farmers in Punjab’s Malout district. Addressing farmers from Punjab and the neighbouring state of Haryana and Rajasthan, the Prime Minister said that stubble burning has been taken up with utmost seriousness by the Union Government.

“I want to talk about the important issue of stubble burning from this platform. The central government is working seriously on this issue so that farmers are not compelled to burn agricultural residue after harvesting,” said Prime Minister Modi.

The Prime Minister said that an amount of Rs 50 crore has been allotted for the states of Punjab, Haryana, Uttar Pradesh and Delhi, to tackle the problem of stubble burning. Stubble burning, the act of burning agricultural residue after harvesting, has often been recognised as one of the principal causes of air pollution. Stubble burning reaches its peak during the months of September-October, resulting in highly polluted air across north India during the winter season. Stubble burning was also mentioned by Finance Minister Arun Jaitley in this year’s budget speech, who said that removal of crop residue will be subsidised to tackle the problem of stubble burning.

The Prime Minister said that more than fifty per cent of the allocated Rs 50 crore will be spent on solving Punjab’s problem of stubble burning. The Union government will give an assistance of 50 per cent to farmers for purchasing machines required to clear agricultural residue. The Prime Minister requested farmers to become a part of the government’s scheme and not burn crop residue, as that contributes to air pollution and affects the health of others.

As per an estimate, if farmers don’t burn stubble and allow crop residue to remain on their fields, they can save an expenditure to the tune of Rs 2,000 per hectare on use of fertilisers, said Prime Minister Modi.

Punjab approved a Rs 5,000 crore plan to check stubble burning, along with Indian Oil Corporation. The extent of success of both the Union government and the Punjab state government’s plans to fight stubble burning will only be realised during the winters this year.