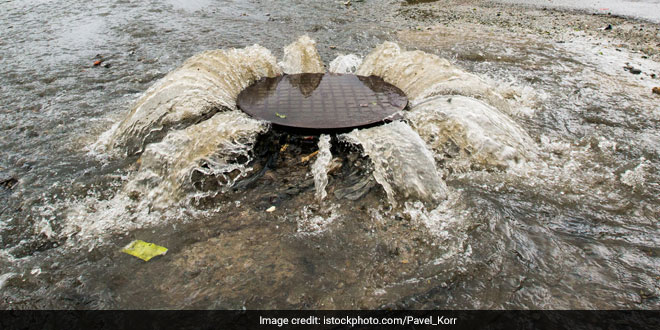 New Delhi: A federation of apartment owners’ association today moved the National Green Tribunal (NGT) against the problem of sewage overflow in Indirapuram in Ghaziabad, prompting the green panel to seek replies from the Uttar Pradesh government and the civic authorities. A bench headed by NGT Chairperson Justice Swatanter Kumar issued notices to the Yogi Adityanath government, its pollution control board, Uttar Pradesh Jal Nigam, Ghaziabad Development Authority, District Magistrate and the municipal commissioner. They have been directed to file their replies before October 4, the next date of hearing.

The green panel was hearing a plea field by Ghaziabad- based Association of Apartment Owners seeking a direction to resolve the issue of overflow of sewer system in Indirapuram area within 6 months.

The association contended that it has been receiving several complaints from apartment owners in Indirapuram in the last couple of years about the overflow of sewer water into their apartments and basements due to choked drains.

The plea said that the problem got aggravated in the monsoon when it becomes all the more difficult to pump out the water due to the choked drains and sewer network.

There has been a spurt in the construction of houses and group housing societies in Indirapuram, Ghaziabad, resulting in the increase in the density of population, the sewer lines in the area are grossly inadequate.

At places, the sewer pipelines are old and small in size, and in some places they are not interconnected properly to the main line. Further, the drains in most of the places are choked with garbage from roadside vendors, debris from under construction buildings, etc, the plea said.

The plea claimed that sewer line in Indirapuram is open at many places which attract garbage dumping resulting in clogging of the drains. The open sewer is also a death trap for citizens besides polluting the vicinity and being breeding spot for life threatening diseases.