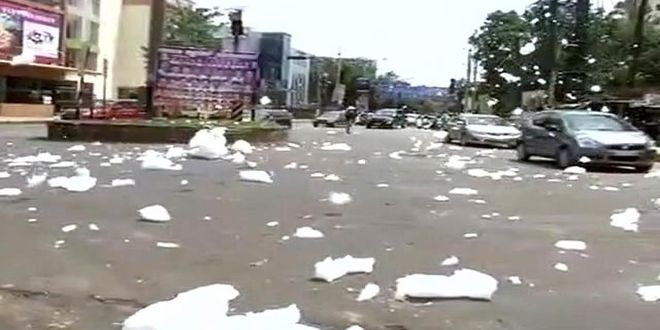 New Delhi: The National Green Tribunal (NGT) has directed the Karnataka government to submit complete action plan with regard to cleaning and removal of municipal solid waste in Bellandur lake in Bengaluru, where carcinogenic foam has been frothing again over the past few days. The green panel slammed the Karnataka government for not taking appropriate action to clean the Bellandur lake and said it was not satisfied with the answers given by different authorities in relation to compliance of its directions.

It has sought action plan with regard to removal of silt and municipal solid waste from the lake and the treatment of the sewage which is going into the water body.

“The Additional Chief Secretary and other senior officers of the state government and the stakeholders concerned are present. We are not satisfied with the answers provided by the respondents in relation to compliance of the directions issued by the tribunal, from time to time.

“However, the counsel appearing for the state submits that he would personally look into the matter and place before the tribunal a complete action plan,” a bench headed by NGT Chairperson Justice Swatanter Kumar said.  The tribunal also directed that action that should be taken against the residential complexes which are causing pollution, generating sewage and “sending detergents and allied pollutants” to the lake.

“The existing sewage treatment plants, their capacity, technology and the parameters which they are capable of providing to the effluent upon treatment should also be submitted.

Earlier, the NGT was informed that fresh froth has emanated from Bellandur lake and spread on to the streets of the surrounding areas due to the recent rains.

Local residents have reportedly complained of pungent stench from the lake and the froth, reminding of the presence of toxic substances there.

Slamming the local civic bodies for inaction, the bench had banned dumping of any municipal solid waste around the lake and announced an environment compensation of Rs 5 lakh on anyone found dumping waste in and around the lake.

The NGT had also lashed out at the Karnataka government and its agencies responsible over lack of maintenance of the Bellandur lake, asking them why they should not be prosecuted for negligence.

It had earlier issued notice to the Union Environment Ministry, the Karnataka government, Lake Authority of Bangalore, state pollution control board and Central Pollution Control Board in the case.

On February 20, the NGT had taken cognisance on its own of media reports and photographs of the incident in which a fire broke out in the Bengaluru lake.

Thick clouds of white smoke persisted for several days in the air around the Bellandur lake after the blaze.

After 10 Deaths In Five Weeks In The Capital, Delhi Government Cracks The Whip On Manual Scavenging