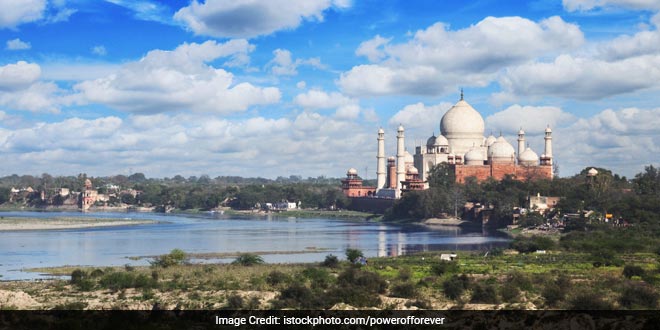 Agra: Proclaimed as one of the Seven Wonders of the World, the Taj Mahal is the mausoleum of Mughal emperor Shah Jahan’s beloved wife Mumtaz. Finished in marble, it is one of the most famous buildings in the world.

Agra has, over the years, became a major tourist destination because of its many splendid Mughal-era buildings. It is revered as an abode of 3 world heritage monument- Taj Mahal, Agra fort and Fatehpur Sikri.

Among all of them, the Taj Mahal has been identified as one of the iconic locations for observing international standards of cleanliness under the Swachh Bharat Mission.

On recent visits to the city, one sees the surrounding areas of the Taj Mahal being spruced up; from relaying of the roads with granite and sandstone to street furniture, landscaping, underground cabling and lighting being done to further deck up this beautiful Mughal architecture.

Several steps have been taken to improve and decongest the area immediately around the monument.

To protect the Taj Mahal from the effects of air pollution, motor vehicles have been banned within 500 metres of the complex. Vehicles are allowed only till the Shilpigram parking after which electric vans, buses, tongas or rickshaws are used to reach the mausoleum.

The maintenance inside the Taj Mahal is undertaken mainly by Archeological Survey of India (ASI) while the outside is under the Agra Municipal Corporation.

“We need people to be involved to make this place more beautiful by not littering” says Dr Bhuwan Vikrama, the superintending archeologist of the ASI. He said that the monument is clean and very well maintained but if the tourists do their bit, it will make things easier for the ASI.

The city attracts over 8 million tourists annually. With the growth in the tourism industry and the construction of Yamuna Expressway that connects Agra with Delhi, the number of tourists visiting the monument has increased manifold in recent years.

To further improve connectivity an inner ring road is close to completion so tourists will now reach the Taj Mahal directly off the highways, avoiding the congested roads and traffic jams.

“With the new inner ring road the tourists will save a lot of time and reach Taj Mahal without any jams. To beautify the area outside the monument we are relaying the roads, removed all overhead cabling and putting lights” says Dinesh Kumar, Deputy Director Tourism, Agra

Though, the air connectivity still needs to be looked at.

Nearly 3,500 toilets have already been constructed in Agra. On a visit to the Ghaseyari mandi close to the monument, it became evident that the 200 families who were earlier forced to defecate in the open are now equipped with their personal toilets.

The Agra Municipal Corporation has brought out a phone app, as well, for the masses to reach out to them and inform them of any issues related the sanitation facilities.

“With the phone app people can tell us the issues related to sanitation and we try to solve the matter at the earliest. Besides that littering is a huge challenge because that is to do with the mindset of masses”, says Indra Vikram Singh, the Municipal Commissioner of Agra.

Though, Agra has constructed maximum number of toilets in the state of Uttar Pradesh and has also raised the penalty against open defecation, the Yamuna River still remains more like a sewage canal.

The bacteria from the polluted river are a threat to the monument. Swarms of bugs are breeding in the stagnant water and infesting the marble walls of the monument, resulting in greenish black patches on several places of the intricate floral inlay works.

“We have identified the insect as Goeldichironomus. These grow in numbers when pollution levels of water bodies rise. They form a swamp and are attracted towards sand (stone)” Dr Bhuwan Vikrama, explains.

“The greenery on the monument’s white marble is partially digested chlorophyll combined with their fecal matter. So, water and air pollution is a huge threat to the monument” he says.

Though, the Taj Mahal and the area around the monument is well maintained, the city of Agra needs better sanitation management and tougher enforcement measures to ensure a truly swachh Taj city.

Eliminating the huge disparity between the beautiful monument and the rest of the city is the biggest challenge for the city. To assist with this, The NDTV – Dettol Banega Swachh India campaign has put together an agenda for a cleaner Agra: 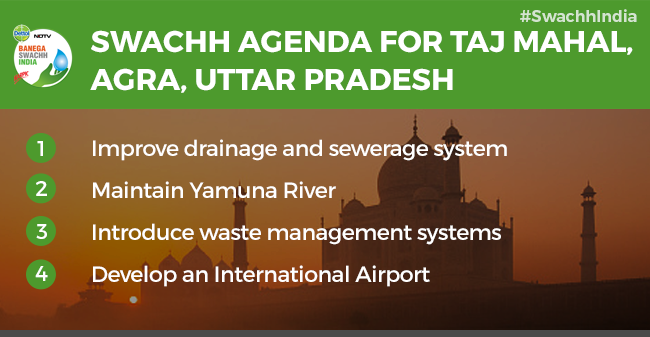 Varanasi: One Of India’s Holiest Cities, Death And Dirt Envelope It

Cleaning Up Tirupati’s Landmark Temple And Its Surroundings