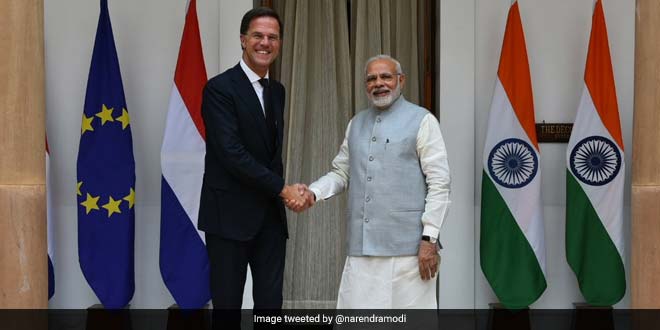 New Delhi: With global cooperation becoming increasingly necessary to tackle air pollution and strengthen waste management, India recently found a new ally in Netherlands. The visit of Dutch Prime Minister Mark Rutte to India on May 24 saw the two countries discussing on cooperation in a variety of fields, which included tackling air pollution and managing waste. Along with Prime Minister Narendra Modi, the Dutch PM launched the ‘Clean India Air Initiative’ in Delhi. The campaign will look to curb air pollution in India by promoting collaboration between India based startups and Dutch companies, to provide corporate solutions for cleaner air.

Discussing technological cooperation between the two countries, the issue of stubble burning was also discussed extensively. Stubble burning in parts of Punjab, Haryana and other north Indian states is a major contributor to air pollution. The collaboration between Indian and Dutch companies will look to upcycle agricultural waste. Agricultural waste will be used as raw material in the construction and packaging industry, key collaboration field Dutch companies are interested in when it comes to investment in India.

Apart from air pollution, India and Netherlands also agreed to cooperate and work together towards technological developments in the fields of solid waste and waste water. Both the governments have committed to assist the tanneries in Kanpur and Unnao to adopt eco-friendly technologies with respect to management of waste generated in them, as well as water conservation during the day-to-day activities of the tanneries. Both the countries commended the Indo-Dutch research on using water in cities, exchange of information on modeling of water flow in rivers and re-use of liquid waste as a form of waste to wealth transition.

War Against Plastics: Raipur Ropes In Underprivileged Women To Replace Plastic Bags With Cloth Bags In The City