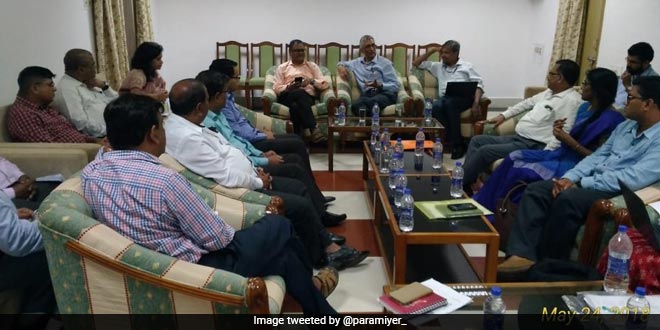 New Delhi: Odisha has been a slow performer under Central government led Swachh Bharat Abhiyan, since 2014. As per the data available on Union government portal, Odisha’s sanitation coverage was mere 11.75 per cent before the start of Clean India Mission and in four years, the level of sanitation has risen only to 55.06 per cent. But despite this, the Odisha government is confident of achieving its open defecation free (ODF) target before the national deadline of October 2019. The government has set an ambitious target to achieve the ODF status a year early, by the end of 2018.

On May 24, Secretary, Ministry of Drinking Water and Sanitation Parameswaran Iyer and Chief Secretary, A P Padhi reviewed the sanitation progress in Odisha and said that they are trying to achieve the target of an ODF state by December 2018.

We have made substantial progress in comparison to October 2014, when we started the campaign. As of now two districts Deogarh and Jharsuguda, have been declared ODF. Detail work plan has been made to make four other districts ODF by the end of July. These districts are Balasore, Gajapati, Sambalpur and Subarnapur.

He further said, the present average coverage in these districts was around 74 per cent.

While reviewing the district wise progress Mr. Iyer appreciated the focus on behavioural changes, which is usually one of the biggest hurdles. He told PTI,

Odisha has gathered momentum in the mission campaign and it is right time to push it ahead with more speed.

Useful insights thru informal interaction with some Collectors of Odisha at Bhubaneshwar today to discuss the @swachhbharat programme. Earlier a courtesy call on CM @Naveen_Odisha and a review meeting with CS Padhi and team. State planning to become ODF by December 2018. pic.twitter.com/2HtzNyKoTr

Achieving ODF status is one thing while sustaining that status is another. For the same, Mr Padhi directed all the collectors that their reports should clearly highlight the on ground reality and stringent monitoring should be made for sustaining the ODF tag.

From lack of infrastructure to lack of motivation and knowledge among people to delay in approval of applicants, there are numerous things responsible for poor state of sanitation in Odisha. Two major challenges in Odisha’s ODF mission:

1. Lack Of Public Participation – Public participation and sanitation go hand in hand. If people are not motivated to take a step, if people will not change their mindset then nothing can be done. Officials can construct toilets, but what is the point of doing that if individuals will not use them. For this it is necessary to bring in a ‘behavioural change’ and shatter age old practice, taboos, and myths.

Though Information, Education and Communication (IEC) activities like door-to-door interpersonal communication, Swachhta raths, rallies, marathons, quiz and painting competitions, mass mobilisation activities have helped in making people aware of the ill-effects of defecating in open, but still Odisha has a long way to go.

Also Read: Despite Building Over 33 Lakh Toilets, Why Is Odisha Struggling To Meet Open Defecation Free Target By October 2019?

2. Lack Of Space And Connectivity – Most of the houses are in the interiors where even road connectivity is an issue. In such cases, transporting raw materials becomes a task and even if one manages to do so, people refuse to construct a toilet, reason being lack of space. Most of the houses have little to no space to construct a toilet. There is not enough space to put a sewage pipeline and other things.

Since the launch of the Swachh Bharat Abhiyan in 2014, total sanitation coverage in India has increased from 38.70 per cent to 84.19 per cent. Along with this, 13 state and 3 Union Territories have become open defecation free and government is confident about raising this number to 25 by October 2018.