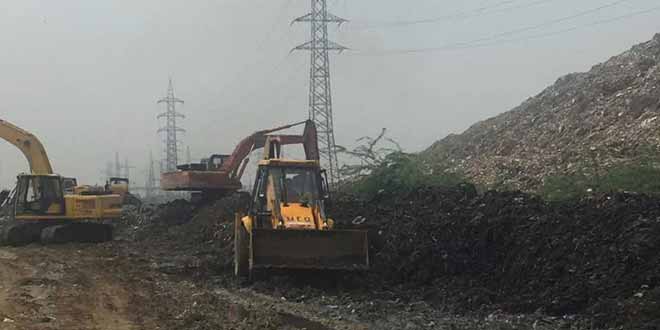 New Delhi: In compliance with an order of the National Green Tribunal (NGT), the Noida Authority today started work to clear the garbage which was being dumped at a landfill site in Sector 54 in the middle of the city, officials said.  In the initial stage, the waste would be stabilised – dry enough to be transported away from the site – and later remediation process segregation of the solid waste and combustible waste from the soil will take place, they said.

The NGT had on May 29 put a stay on the dumping of garbage and municipal waste at the site, heeding to a plea of residents, and instructed the authority to instead dispose the waste at another identified site in Sector 123. The NGT’s order had come after city residents through their counsel argued that dumping of solid and medical waste in huge quantity in the middle of the city by the Noida Authority had degraded environment and posed a serious health risk to the residents of sectors 22, 23, 53, 55 and 56. The Resident Welfare Associations of these sectors had sought the green body’s directions to immediately stop dumping of solid waste at the site in Sector 54.

“Officials of the Noida Authority today inspected the site where the solid waste was being dumped. Work has been started to remediate the waste at the site. Before the remediation process, the waste would be stabilised,” Officer on Special Duty, Noida Authority, Rajesh Kumar Singh said.

He said the authority had last month awarded a contract via tender process to a company to get the work done. The firm, which has been awarded the contract, has a foreign company as its partner and the machines to be used in the process are being imported from abroad, he said. The work of radiation will start after installation of the machines, which is expected in the next two months, Singh added.