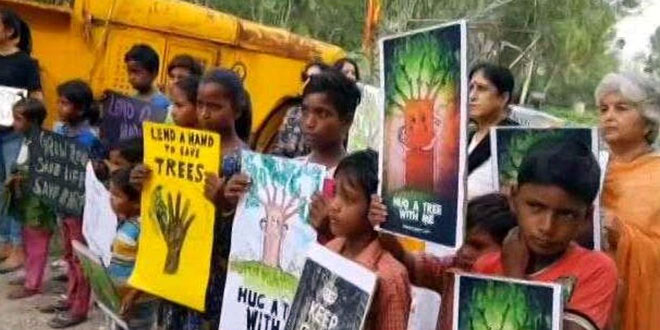 Mumbai: A week after Noida residents staged protest against tree felling in sector 91 of Noida, the National Green Tribunal (NGT) has directed the Gautam Budh Nagar Divisional Forest Department to verify if the trees were felled for construction of an upcoming biodiversity park in the same sector. Terming felling of 3,000 trees as an ‘environmental damage’, a Social Action for Forest and Environment (SAFE) had filed a petition with the Green Court on August 31. The NGO, in its petition, had also requested the NGT to prohibit further felling of trees at the location and order plantation of ten times the number of trees in and around the vicinity.

A bench headed by NGT Chairperson Justice Adarsh Kumar Goel has given the Forest Department a period of two months to verify the claims made by the NGO and prepare a report. The tribunal has posted the matter for consideration on November 14.

Cutting of trees is an act of compromising clean air. It is surprising to note that the authorities, who are promoting afforestation in other parts of the city are cutting trees in one part to develop a park. We consider NGT’s decision as some progress towards developing a healthy environment, Vikrant Tongand, who filed the petition, tells NDTV.

While the forest department and Noida Authority has claimed that the Eucalyptus trees were cut with due permission, the NGO says that a private contractor was hired who removed other species of trees which is a violation of the permission granted under the Uttar Pradesh Trees Protection Act, 1976, and hence, the permission is liable to be quashed.

The plea has further said that the authorities have also failed to seek permission from the Central Ground Water Authority to extract groundwater for the construction activity of the park that is spread over 75 acres.

The Noida Authority on its part had last week issued a statement saying that since the trees were over 30-years-old they didn’t have any environmental or timber value. It had also said that that no amphitheatre or food courts will be constructed inside the park and only five to six per centre of concrete will be used in the entire area.

As per the plan, the authorities aim to plant around 5,000 varieties of native trees and 1,00,000 species of miniature plants in the park which is scheduled to be completed in next six months. The massive plantation drive was kickstarted last week with planting of 600 trees in sector 91.

Air Pollution In Bengaluru: Not Just Outdoors But Air Has To Be Clean Even Indoors, Say Experts