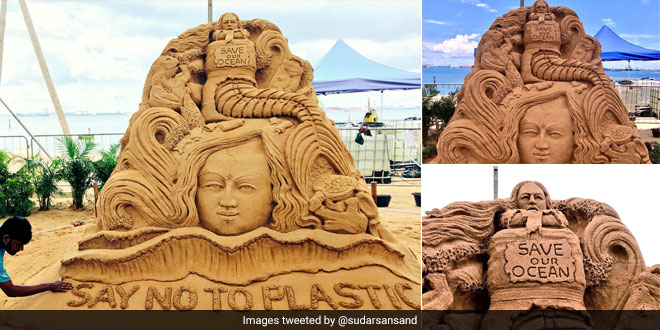 In a bid to spread awareness on how plastic menace is killing the planet, internationally acclaimed and Padma Awardee, Sand Artist Sudarsan Pattnaik, created a sand sculpture on Sentosa Island in Singapore which showcased the unfortunate plight of the marine life due to growing Ocean pollution. With a strong message ‘Say No To Plastics, Save Our Oceans’, the artist created the sand art on the concluding day of the ongoing Singapore International Sand Art Festival 2017 to highlight the hazards of plastic pollution and how it’s impacting our oceans.

According to the new cradle-to-grave global study, industry has made more than 9.1 billion tonnes of plastic since 1950 and nearly 80% of it usually ends up in landfills, so there’s enough plastic waste that are depleting our planet, to be precise, this much plastic waste can bury New York’s Manhattan 2 miles deep. Studies also suggest that there are around 5 trillion pieces of plastic that are floating in the sea that ends up killing 100,000 marine creatures and around 1 million sea birds every year.

Art With A Strong Message

In order to educate the masses on why they need to stop using plastic, especially disposable plastic, Sudarsan Pattnaik chose to create this recent masterpiece.

My SandArt “Say no to Plastic; Save our Ocean “ at #Singapore International SandArt Festival 2017 getting final shape. pic.twitter.com/KK6493CQuK

The efforts of the artist even get a laud from United Nations Environment Programme, the organisation tweeted, “LOOK: International Sand Artist @sudarsansand calls the world to action for #CleanSeas #BeatPollution.”

This is not the first time the sand artist has created Swachh Bharat themed artwork internationally; Sudarsan Pattnaik has participated in more than 50 international sand sculpture champions and has also won many awards for India. From ‘Say No To Open Defecation’ to ‘Stop Littering’ and ‘Save Our Oceans’, the artist has created many stunning artworks in the sand in order to spread the Swachhta message across the world and make an impact.

Recently, Sudarsan Pattnaik also received the Bharat Gaurav award from Odisha Finance Minister and was rewarded Rs 25,000. Sudarsan Pattnaik decided to use the cash reward that he received for construction of toilets near Puri beach in order to make the city free from open defecation.

I have decided to utilise cash reward of Rs 25,000 for construction of toilets near Puri beach to prevent open defecation by fishermen. https://t.co/2MMgE67a8X

With creativity as his tool, Sudarsan Pattnaik aims to spread awareness among people, so as India can fulfill the dream of the Swachh nation by October 2, 2019.

Delhi Drowns In Its Own Trash: The Oldest Functional Ghazipur Landfill Caves In, Two Dead, Many Fear Trapped