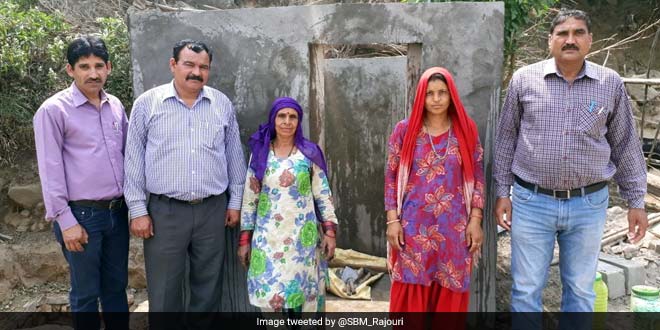 New Delhi: As a number of states bask in the glory of toilet construction under the Swachh Bharat Abhiyan, some have missed out on boarding the Swachh bandwagon. Though a majority of states at present enjoy sanitation coverage above 80 per cent, a few continue to languish at 60 per cent or less. Jammu and Kashmir’s performance under the Abhiyan has been mediocre till now, with sanitation coverage of 60 per cent and only three open defecation free districts. The state’s toilet construction endeavour however, received a boost since March 15. A total of 1.22 lakh toilets have been constructed in the state within two weeks, prompting hopes that the state is in the right direction  to meet the open defecation free goals.

At a press conference arranged by the Ministry of Drinking Water and Sanitation to review the progress made by states so far under the sanitation campaign. B.B. Vyas, Chief Secretary participated in the video conference and informed the Ministry of the state’s recent feat. The number of toilets built in 14 days is more than the entire number of toilets built in the years 2015 and 2016. To improve its performance, the state is presently setting monthly targets of building toilets. The Chief Secretary informed that for the month of March to April, the state’s target has already been met.

For nearly three years, the state saw very low and lax implementation of Swachh Bharat Abhiyan’s scheme of building toilets. In the last six months however, things have taken a turn towards positive. We are now setting monthly targets across districts. We are confident that despite a slow start, we will achieve the open defecation free target by 2019, said Mohammad Nazir Sheikh, Director of Rural Sanitation, Jammu and Kashmir.

To ensure speedier constructions, the state has begun providing masonry training to local population, who are being assisted by district administration members. Terrain had proved to be a major challenge in construction of toilets in the state and those familiar with local terrain are best suited for toilet construction, due to which the locals are being extensively trained. District administrations are also arranging for regular awareness campaigns, motivating people to use toilets and informing them about the ills of open defecation. Nearly 4 lakh more toilets are to be built in the state and post the completion of construction by 2018, the state will focus on verification and sustaining ODF objectives.

The state government has declared that Jammu and Kashmir will become ODF by July 2018. Jammu and Kashmir’s slow transition in the Swachh Bharat Abhiyan is reminiscent of the classic tale of the tortoise and the hare and becoming completely ODF will be a big positive for the state which remains in news for controversial reasons.

Over Rupees 40 Crore Allocated But “Not One Toilet In Delhi” Under Swachh Bharat, Says CAG

Sewer Work Delayed By 10 Years Due To Lack Of Due Diligence By Delhi Jal Board: CAG Report