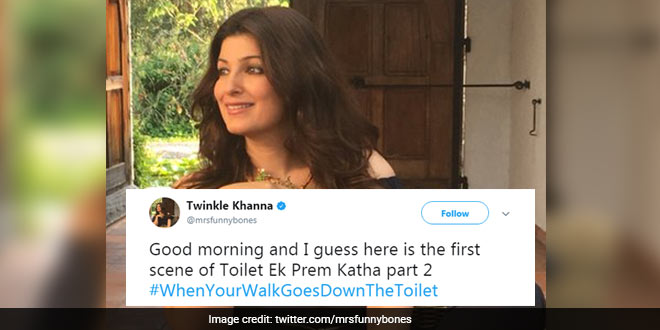 New Delhi: Mumbai was declared open defecation last month by Chief Minister, Devendra Fadnavis, but, that tag got a reality check. Actor-author Twinkle Khanna recently tweeted a picture of a man defecating on Versova beach. On Saturday, when the 42-year-old author was out for her morning walk when she noticed a man openly defecating and Mrs Funnybones shared this tongue-in-cheek comment on her microblogging site, “Good morning and I guess here is the first scene of Toilet Ek Prem Katha part 2 #WhenYourWalkGoesDownTheToilet.”

Fighting open defecation is the plot of her husband Akshay Kumar’s latest release, Toilet: Ek Prem Katha, which has become the first major hit of 2017 at the box office since its release on August 11. Twinkle’s Versova beach post has been re-tweeted and liked by thousands on twitter. In another related post Twinkle highlighted the problem of awareness and attitudinal change among people. The man who was caught defecating in the open could have used a public toilet which was at a walking distance of 7-8 minute from the spot.

Exactly!The public toilet is a 7-8 minute walk from this particular spot… https://t.co/4533Q4YbWy

According to the officials too, there are enough toilet blocks in the Versova beach area. Commenting on Twinkle’s post, a civic official, Kiran Dighavkar said, we have provided enough mobile toilets. Sixty one community toilet seats have been provided inside the slums along the beach and 12 more seats will be open from next week. If need be, we can provide more toilets in the area.

Another official added, “In our mass campaign, the civic body figured out the open defecation spots across the city and then installed toilets there. But what can we do, if people do not use toilets and indulge in such acts.”

The Brihanmumbai Municipal Corporation (BMC) had earlier roped in the megastar Salman Khan as the brand ambassador for the ODF campaign to provide mobile toilets in spots known for open defecation is the city. As part of the Swachh Bharat Abhiyan, the BMC also launched a creative initiative – Chakachak Mumbai, in which community toilets are given a creative makeover, in order to motivate people to use public convenience instead of open defecation or urination.

But this latest incident on Versova beach, which has also witnessed one of the largest beach clean-up efforts in the world, shows that the Swachh battle is far from over.