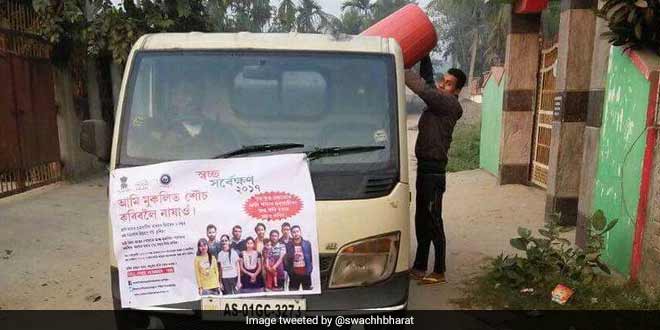 New Delhi: Nearing its third year, the Swachh Bharat Abhiyan’s urban initiatives of eradicating open defecation and managing waste from cities and urban spaces is finally gathering much needed steam. Though the urban wing of the sanitation mission has till now built little above 33 lakh individual toilets in urban homes against the target of building 1.25 crore toilets in cities is still far away. But ever since the mission began, several cities have declared themselves as open defecation free (ODF), Guwahati, the capital of Assam being the latest entrant in the list of ODF cities. The declaration came on the eve of India’s 70th Independence Day celebrations. The districts of Kamrup and Nalbari in Assam have also been declared as ODF, but for Guwahati, the ODF tag is just one of the several challenges that the city has managed to overcome.

Assam has followed a somewhat different mode when it comes to construction of toilets. Instead of the district administration taking initiatives to help people in the construction of toilets, it is the NGOs which have played a key role in changing the sanitation scenario across Assam. Nearly 60 NGOs are involved across the state’s rural and urban areas in not only toilet construction but also ensuring waste management and disposal of solid waste. But sadly, Guwahati’s performance in the other aspects of cleanliness has not been encouraging, till now. For a city that produces 500 tonnes of waste every day, the system of waste segregation, collection and disposal has not really been put into place, resulting in an erratic waste disposal mechanism. The absence of a proper waste collection and disposal system had also hurt Guwahati in this year’s Swachh Survekshan rankings, as the city slipped to 41 from last year’s rank of 17.

Waste is still a problem that is posing a big challenge for us across the city. Rampant disposal of waste is a huge problem for us, especially in market areas but residents also contribute to the waste problem as unsegregated waste continues to be handed over to garbage collectors, and at times disposed of in the streets, said Monalisa Goswami, Commissioner, Guwahati Municipal Corporation.

The marketplaces in Guwahati are of primary concern for the Guwahati Municipal Corporation (GMC) officers. Marketplaces generate eight to ten tonnes of waste daily, most of which are unsegregated and disposed casually. This has happened for several years due to the lacklustre attitude of shopkeepers in some of the city’s premier markets. The unsegregated nature of the waste further makes it difficult for garbage collectors to collect the waste and dispose it in landfills. To address the anomaly of piled up waste in Guwahati’s markets, the Guwahati Municipal Corporation (GMC) has announced the formation of committees headed by shopkeepers which would monitor the collection and disposal of waste generated in the marketplace. Shopkeepers found out that disposing garbage near their shops would also be fined by the GMC. But some are of the opinion that this might not necessarily be an effective step.

The Swachh Bharat Abhiyan talks about bringing in behavioural change and we all know that is not going to happen overnight. It is up to civic bodies to make people more aware of how and why they should segregate and dispose waste. Merely implementing fines will result in shopkeepers gathering waste and disposing it somewhere away from the market. But that will not bring in any long term change in the habit of dealing with waste, said Mahfuza Rahman, Associate Professor, Cotton College and author of ‘Urban Solid Waste and Health Implications in Guwahati.’

The GMC has also gone a step ahead and warned that residents found throwing garbage into drains and roadsides will have FIRs registered against them. This step again is indicative of short term solutions adopted by civic bodies where coercion is used rather than attempts to bring in actual behavioural change among people. Further, the GMC’s performance in garbage collection has been erratic and irregular. Many of the GMC’s 31 wards see door-to-door waste collection twice a week, against the recommended daily. The municipality has around 2,500 workers but needs at least 3,000 if waste is to be collected on a daily basis. Payment of wages by the GMC has been a recurring issue for workers, who have often gone on strike since 2015, demanding better pay. Expecting dissatisfied GMC workers to keep tab on residents and file FIRs is too optimistic and again uses the coercion card rather than bring in actual behavioural change.

The civic body is already dealing with dissatisfied sanitation workers. Expecting them to keep tab on residents will hardly serve the GMC’s purpose. Further, waste management should be accompanied with behavioural change. Filing FIRs against people disposing waste anywhere will only scare them in doing so covertly, but the behaviour will not change, said Mrs Rahman.

Since the city has no waste treatment plants in the vicinity and the sole landfill at West Boragaon is nearing exhaustion, the GMC faces an immense task of managing waste in the city. One silver lining for the civic body has been that 25 more NGOs, along with the existing 31 for each ward will join GMC’s waste management initiatives from September 2017. These NGOs will be tasked with organising waste segregation camps, monitoring waste segregation and collection throughout the city. Bigger residential complexes will also come under by-laws which will allow them to segregate and treat waste on their own. Guwahati has miles to go for effective waste management to become regularised in the city. But the city civic body must opt for long term solutions instead of short term quick fixes if the city is to indeed deal with its waste problem effectively.

Also Read: E-Waste In Northeast India: How Assam Is Planning To Fight The Rising Crisis