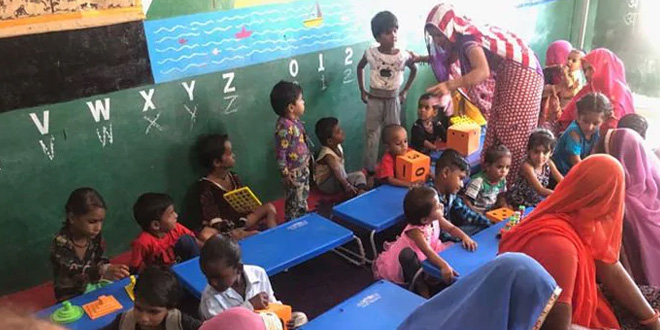 New Delhi: The outbreak of novel coronavirus (COVID-19) is seen as major public health concern for people across the globe. The first case of Corona pandemic in India was reported on 30th January 2020, originating in China. Amid nation-wide shut down due to COVID-19, various state governments, taking precautionary measures started closing down the educational institutions and so the anganwadi centres. The national capital territory of Delhi also decided to suspend the activities of 10,897 anganwadi centres, initially till 31st March 2020, which is now extended for next two weeks after. Therefore, on behalf of Campaign against Hunger and Malnutrition, started by a Delhi based NGO Matri Sudha, a delegation of two people went to meet the Minister for Women and Child Development, Government of NCT of Delhi to arrange an alternative mechanism so that children do not remain hungry at the time of this crisis.

One of the major interventions of the anganwadi centres is to provide supplementary nutrition full of protein and calories to bridge the calorific value in their average daily intake and recommended dietary allowances. The delegation briefed the minister about the situation of children living in bastis/clusters in different areas and requested that government provide supplementary nutrition either in the form of dry ration or food items like banana, boiled eggs, panjiri among others, at their homes. The delegation from the campaign emphasized to deliver food at homes through respective anganwadi worker and the helpers in order to avoid any public gathering in the anganwadi centre. The government must also think about how to provide meals to mid-day meal beneficiaries in the capital.

Considering the need of the hour, on March 18, the government came with an order stating the fact that ‘although AWC shall continue to be suspended till March 31 distribution of Supplementary Nutrition (Panjiri/Paushtik Laddoo) shall be resumed with effect from March 19 so that nutritional supplement to beneficiaries does not get interrupted. The supplementary nutrition has been prefixed as 315 gm Panjiri and 105 gm in two separate packets and 12 Laddoos 330 gm in one packet respectively.

The 10897 anganwadi centres cater to around 4.34 lac children and more than 1 Lakh women from 9 districts of Delhi providing them hot-cooked meal to children and take-home ration to women who are pregnant and mothers who breastfeed their children. Majority of these children come from low socio-economic background and the supplementary nutrition given in the anganwadi centres is the only option with them.

Also Read: Coronavirus Outbreak: A Complete List Of Places In India Where You Can Get Tested For COVID-19

When it comes to Mid Day Meal Programme (MDM), the National Capital of Delhi has the largest set up. MDM in schools is managed by nodal agencies, the Directorate of Education, Municipal Corporation of Delhi (MCD), and New Delhi Municipal Corporation (NDMC). MDM came into operation from July 2003 in a phased manner. The Delhi Government has a total of 1227 government and government-aided schools in Delhi, which is 21.30 per cent of the total schools running in Delhi. In total there are 2400 schools which provide mid-day meal to around 12 lakh children every day.

The first ground report for distribution of supplementary nutrition came from Nardan Basti in South-East Delhi, where the anganwadi worker Kavita reported that her anganwadi centre received Panjiri for women and Groundnuts for children.

One of the active members of the campaign Mr. Binod Kumar who works with children with Disability and associated with a non-profit organization Arth-Astha reported that anganwadi workers in Tughlakabad distributed the supplementary nutrition in beneficiaries home.

In Narela, from North-West district, the anganwadi workers were yet to receive the ground-nuts. There was fear among anganwadi workers that they were not given any protective instruments like gloves and sanitizers, as they have to venture out for distribution of nutrition. The government should also take care of the workers and helpers as well. Another anganwadi worker from Nardan Basti, Hemlata, it is very difficult for us to get sanitizers and masks from the local vendor. This should be taken care by the government to ensure that one of their key workforce, having more than 20,000 working to improve the lives of children and women, do not remain at risk.

Also Read: Why Does Coronavirus Spread So Easily? Experts Explain

Further, the workers were running short of quantity, said Deepa Bajaj who works with anganwadi workers through her non-profit Child Survival India. In Govindpuri area, the anganwadi workers reported to distribute one-week supplementary nutrition to the beneficiaries.

Few workers from Sundernagari area in East Delhi reported to distribute Panjiiri and Paushtik Laddoo to children and women. However, in majority of the cases, the beneficiaries reached out to anganwadi centres to get the food, reported Praveen Verma and Rajeev Kumar associated with ISHAN and Pardarshita organizations respectively. R M Shukla from ERADA Foundation, a member of the campaign, suggested that instead of providing Panjiri and Laddoos, the government could provide dry-ration items like rice, pulses, wheat flour which could be more beneficial to children and their families.

As per the circular dated 24.03.2020 by the Department of Women and Child Development which stated that the distribution of supplementary nutrition will now be distributed to all beneficiaries at their door step only by Angawadi Woker/Helper. They shall distribute supplementary nutrition once in a week for all six days. Another circular mentioned that the visits are required to be regulated and restricted so that the health of workers and helpers and also the members of the public do not get affected. The frontline workers are advised to wear mask, carry liquid sanitizer and soap. However, such items have to be purchased by the workers themselves, the cost of which would be reimbursed by the Department, later.

So far there is no supply of supplementary nutrition to beneficiaries since this Monday and there is no information among the anganwadi workers. Further, the shortage of supply should be taken care by the government along with health of their frontline workers.

Also Read: Global Hits And Misses In Dealing With COVID-19: Takeaways For India

#21DaysLockdown To Fight Coronavirus: Bollywood Celebs Give A Thumbs Up To PM Modi’s Appeal Of Staying Home