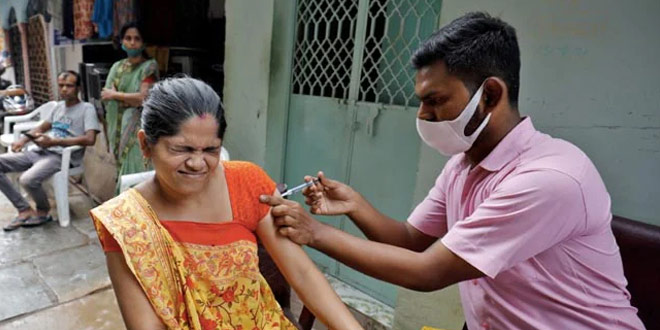 New Delhi: The cumulative number of COVID-19 vaccine doses administered in India has crossed 150 crore with more than 81 lakh shots being given on Friday, the Health Ministry said. Friday’s vaccination tally is expected to increase with the compilation of final reports for the day by late tonight, the ministry added.

The 150-crore milestone was reached earlier on Friday with Union Health Minister Mansukh Mandaviya calling it a “historic achievement” made possible because of the relentless hard work of healthcare workers under the able leadership of Prime Minister Narendra Modi.According to health ministry officials, over 91 per cent of the adult population has received at least one dose while over 66 per cent has been fully vaccinated.

Over 22 per cent of eligible adolescents have been vaccinated with the first dose since the vaccination for this age group began on January 3.

Cumulatively, 51,14,33,066 first doses have been administered to individuals in the 18-44 age group across states and union territories and 34,80,27,006 second doses have been given in the same age group since the start of phase-3 of the vaccination drive, according to the health ministry’s data.

The vaccination exercise as a tool to protect the most vulnerable population groups in the country from COVID-19 continues to be regularly reviewed and monitored at the highest level, the ministry underlined.

Over 90% Of India’s Eligible Population Has Received A Dose Of Covid Vaccine: PM Modi