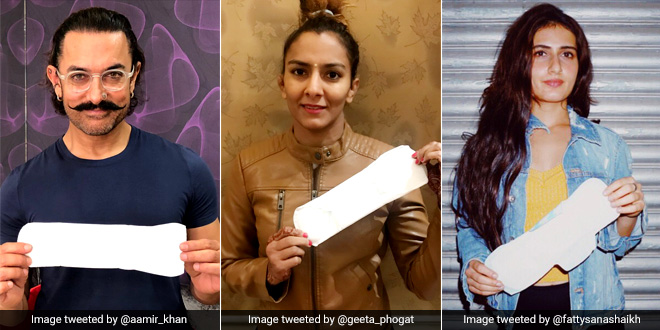 New Delhi: After fighting all kinds of odds and battles, the wrestling family is back, only this time the fight is against the stigma of menstruation. Joining the #PadManChallenge, Commonwealth games gold medalist in wrestling Geeta Phogat recently posted a picture with a sanitary napkin in hand after she was challenged by actor Soundarya Sharma.

thank you so much for tagging me ????@soundarya_20 _and yes it’s pad in my hand! Not a big thing… it’s natural! Period #PadManChallenge @akshaykumar @mrsfunnybones @sonamakapoor @Padmanfilm and now i Challenge to my husband @pawankumar86kg to complete the challenge pic.twitter.com/SfAjFeh9pP

She passed on the baton to her husband Pawan Saroha, who is also a Commonwealth games gold medalist wrestler. “Thank you for tagging me my wife @geeta_phogat and yes it’s pad in my hand! Not a big thing… it’s natural! Period  #PadManChallenge,” he said posting a picture with a sanitary pad.

Aamir Khan aka Mahavir Singh Phogat of Dangal fame, was one of the first few celebrities to take on the #PadmanChallenge. He had been nominated by actor, writer and co-producer of the movie PadMan, Twinkle Khanna.

The others from the 2016 hit film Dangal, based on the Phogat family, a story about Mahavir Singh Phogat, an amateur wrestler, who trains his daughters Geeta Phogat and Babita Kumari to become India’s first world-class female wrestlers, who joined the challenge were Fatima Sana Shaikh, who played the role of Geeta Phogat and Sanya Maholtra aka Babita Phogat.

Fatima Sana Shaikh posed with a sanitary napkin after her ‘Dangal’ sister Sanya Maholtra challenged her. Sanya was challenged by actor Ayushmann Khurana. The ‘Dangal’ duo gave out a similar message urging everyone to not shy away from the topic of mensuration

Thank you @sanyamalhotra_ for tagging me! that’s a pad in my hand & there’s nothing to be ashamed about. It’s natural! Period. #PadmanChallange copy paste this & challenge your friends to take a photo with a pad!Here im challenging @vickykaushal09 @nishkalulla @RitvikSahore pic.twitter.com/BwOwa9BWX3

Thank you @ayushmannk for tagging me! Yes, that’s a pad in my hand & there’s nothing to be ashamed about. It’s natural! Period. #PadmanChallange copy paste this & challenge your friends to take a photo with a pad!Here im challenging @fattysanashaikh @Aparshakti and @Ashwinyiyer pic.twitter.com/Ao1wkpj1xX

Sanya Malhotra also tagged her reel life brother in Dangal Aparshakti Khurana who plays the role of ‘Omkar’ to share the message.

“Thank you @sanyamalhotra_ for tagging me! Yes, that’s a pad in my hand & there’s nothing to be ashamed about. It’s natural! Period. #PadmanChallange copy paste this & challenge your friends to take a photo with a pad,” he tweeted passing on the challenge to others.

Thank you @sanyamalhotra07 for tagging me! Yes, that’s a pad in my hand & there’s nothing to be… https://t.co/NofrhuWPkb

Many actors joined the #PadManChallenge recently:

Nothing to be ashamed of… its Natural… Period !!

Wishing my best to Sundi @akshaykumar – the lovey @mrsfunnybones – the gorgeous two @sonamakapoor & @radhika_apte .. and the entire team #PadMan pic.twitter.com/4lK68JZGEj

#PadmanChallenge:
Challenge accepted @Varun_dvn @AnushkaSharma ???? YES, that’s a Pad in my hand and there's nothing to be ashamed about. It's natural! #Period.

yes thats a pad in my hand and theres nothing to b ashamed of… #overallhygienefirst
Best Wishes #Padman @akshaykumar @mrsfunnybones pic.twitter.com/9PJdei25qs

Don't expect to see a change if you don't make one. #PadmanChallenge accomplished @KausarMunir . I challenge @AnupamPKher @sayantani0609 @srijitspeaketh pic.twitter.com/f6wolWkdWq

Have you ever been sent to buy sanitary pads for a woman? There are so many options available it’s so confusing!
Cheers to @akshaykumar @sonamkapoor @radhika_apte for taking this mainstream
Nominating @SHABIRAHLUWALIA, @rampalarjun, @pathakvinay, @gauravkapur for #PadManChallenge pic.twitter.com/lt5UgMcqcc

Just as giving birth to a child is normal for a woman so are periods! Wishing happy period to entire womanhood. Success & best wishes to #Padman @akshaykumar @sonamakapoor @radhika_apte @ItsAmitTrivedi

The PadMan challenge was initiated by Arunachalam Muruganantham, who fought against all odds and developed low-cost sanitary pad making machine in the year 2004, targeting women living in rural India. He nominated the ‘PadMan’ movie team including Akshay Kumar, Twinkle Khannam, Sonam Kapoor and Radhika Apte and got the challenge rolling which in the last one week has gone viral.