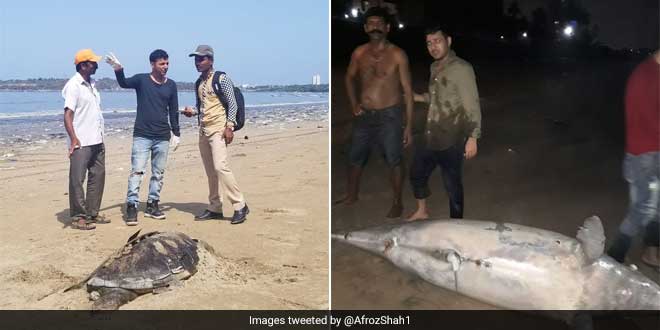 New Delhi: “A dead dolphin had washed ashore three days back at Versova. Now, we have witnessed a death of a fully grown olive turtle. Beautiful species are meeting a tragic end. We have to stop this..These deaths are somehow the result of our actions – we are consuming plastic and littering our planet to such an extent that it has started taking the life out of our ocean,” says Mumbai’s beach crusader, Afroz Shah, who initiated the world’s biggest beach clean-up at Versova in 2015. On Sunday, after his weekly clean-up, Afroz shared pictures of the dead olive turtle with netizens, urging them to save the oceans from marine pollution. He said,

A dead dolphin had washed ashore 3 days back.

Sharing the heart-wrenching pics of a dead dolphin on his social media, Afroz asserted, “It is a very painful experience.”

Forest officials arrive at the scene . Dear dolphin is given a decent burial.

Marine experts claim that it is extremely difficult to find out the reason behind the death of these marine animals as the carcass of both dolphin and turtle has been decomposed.

In Mumbai, Dolphin is the third marine mammal that had died this year at a city beach.

Each year, we are losing thousands of seabirds, sea turtles due to plastic pollution. Plastic litter has a direct and deadly effect on wildlife. We need to understand this and cut-short our dependence on plastics, says Afroz.

Why We Need To Stop

Speaking of India’s share in plastic pollution, the country produces around 15,342.6 tonnes of plastic waste every day. Moreover, it is ranked 12 and is among the top 20 countries that dump maximum plastic waste into the oceans.

Experts predict that by 2020, India will become the third largest plastic consumer in the world, so there will be a lot more plastic waste in circulation.

Afroz Shah signs off by saying,

The sights of mammals dying are painful and sad, to say the least. Our efforts to love and protect nature needs to be scaled and shored up.

Maharashtra government has already put a state-wide ban on the use, storage, sale, distribution and transportation of selected plastic items. The government has issued a plastic ban notice on March 23 and has given consumers and shopkeepers one months’ time to prepare for the ban in the state.

‘If Not Now, Then When’: Actor Amitabh Bachchan Urges People To Adopt Safe Sanitation Practices To Build A Swachh India