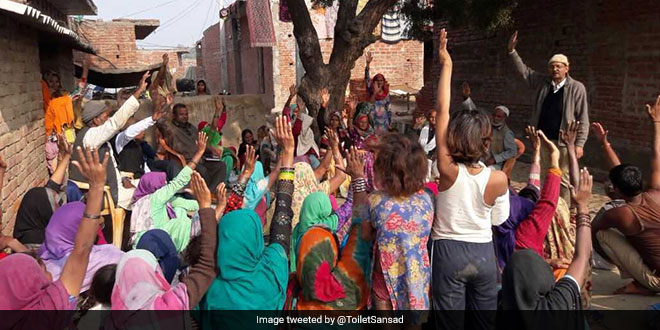 New Delhi: Uttar Pradesh, which features among the list of states with pitiable sanitation condition in India, is leaving no stone unturned to conquer the open defecation free (ODF) status by October 2019.  And this is reflected in the way its regions are coming out with unique initiatives to speed up the toilet building activity. Firozabad, situated in the western part of the state, is the latest district to join the swachhta bandwagon with the introduction of ‘Toilet Democracy’. This new initiative aims to serve dual purpose of self-governance – construct latrines and make common citizens accountable for its cleanliness and hygiene.

After the district realised that most of the newly built toilets turn dirty and unhygienic within days of its construction, it came up with the idea of putting the onus of its cleanliness on villagers. After months of brainstorming and discussions the concept of ‘Toilet Democracy’ was introduced; something that people could easily relate to and at the same time be in position of power.

The concept of ‘Sanitary Parliament’ was constituted by Prabhat Misra, Assistant Director, National Savings in collaboration with the District Magistrate Neha Sharma and Chief Development Officer Ashok Kumar last year in August to speed up the ODF process via citizen involvement.

We, as a district, had a timeline to build 2.5 lakh toilets by December 2018. The entire ODF process is no less than waging a war – a battle to combat the social conditioning of people, a fight to change ‘What is whole fuss about open defecation’ attitude of people.

The objective of this theme is to sustain the ODF momentum by applying the self-rule philosophy. Under this scheme a toilet is for the people, by the people and of the people. Along with the government, villagers will monitor and enhance the toilet status quotient in their respective regions.

The debut of ‘Toilet Parliament’ or ‘Toilet Sansad’ was made in the Mohammadpur Nadayi village on experimental basis and after recording its success, the momentum quickly spread to other parts of the district.

The task of the democratically elected people is to encourage villagers to build toilets and end open defecation. Apart from this preliminary task, the committee will also organise weekly cleanliness drives, teach students about clean habits, talk to girls about issues of menstrual hygiene and disposal of sanitary waste, and involve educational institutions in awareness rallies.

Toilet parliament isn’t the first sanitation initiative of the district. Infact, the whole idea stemmed from the ‘Pradhan Samvad’ movement. Under this, the Sarpanch from every village would come together and discuss the problems or challenges their respective villages faced. Methods including public shaming and linking a women’s dignity with open defecation were implemented under this stage. The movement also garnered support from school children. After gaining initial success, the district administration decided to expand their sanitation revolution by integrating the adults as well and thus came toilet democracy concept.

Also Read: Bareilly’s ‘Roko-Toko’ Campaign Will Sensitise People About The Ills Of Open Defecation, To Meet Its December ODF Deadline

The district, with a population of around 25 lakhs, had its own share of problems. From lack of funds and raw materials to bringing about a mass behavioral change, the officials had to come with multiple measures to overcome these issues.

One significant change the district witnessed post toilet-parliament era, was the people’s enthusiasm to acquire a toilet without having to much think about the funds, “Earlier people were apprehensive about whether they would get the toilet subsidy. But after this democratic initiative people insisted on building toilets with their own funds and help the administration use the toilet funds in other developmental activities of the village,” adds Ms Sharma.

Of the total 2.5 lakh toilet target, the district has successfully constructed around 98,000 toilets and turned 165 of its villages ODF. The remaining 615 villages aim to end open defecation by October this year.