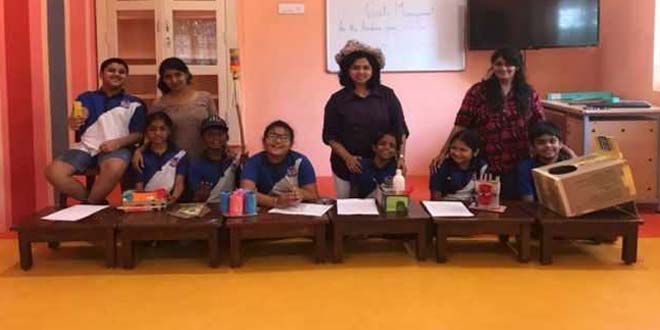 Mumbai: On the first floor of Crescent Matriculation Higher Secondary School in Chennai, a few children aged 11 are cutting plastic bottles in the shape of a plant pot. A few blocks away in the next classroom, two girls are busy collecting newspapers from every student to make carry bags to beat plastic pollution. Meanwhile, five students are giving a final touches to their newly built battery-operated lamps. Amidst the excitement and all the chatter, future innovators are hard at work to create solutions for a sustainable and environment-friendly lifestyle. The programme under which the students are working, is designed by a city-based NGP, Agal Foundation.

Also Read: 10 Swachhagrahis Who Inspired The Country With Their Contribution Towards Swachh Bharat Abhiyan In 2018

Known as ‘Thrash The Trash Champs’, the 23-week educative and interactive module on waste management has already been taught to 600 students and 300 more students are currently undergoing the training in several schools of the city. The idea behind activity-based learning programme is to involve the future generation to make a trash-free environment by incorporating the 3Rs (reduce, reuse and recycle) in their lives from an early age. 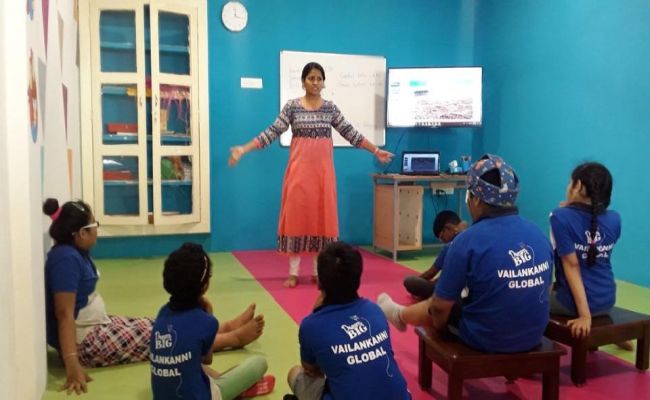 The programme is designed in such a way that it gives students a broad idea about garbage crisis in India and makes them come up with smart and innovative solutions. The aim behind introducing an informative curriculum of waste management in schools is to encourage the young minds to think outside the box and express their views and ideas without being judged. Each and every thought should vouch for proper disposal and segregation of waste, Vajidha Hameed, founder of Agal Foundation tells NDTV. 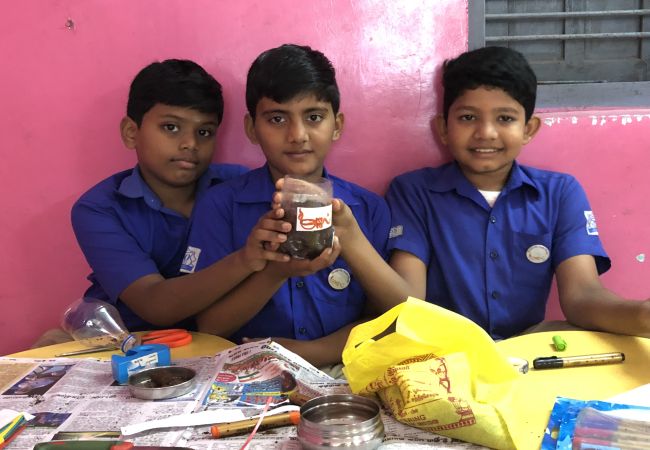 Three years ago, when Vajidha, a resident of Singapore had come down to visit her hometown in Chennai, the city was facing massive floods. While she got involved in volunteering activities to help the flood-affected victims, she witnessed the extent of issues the city was grappling with due to ineffective garbage disposal systems.

I have lived outside India most of my life and I always wanted to give something back to the society. I saw how the garbage rammed the roads after the water had percolated into the water bodies post the floods. So, instead of doing something in Singapore, I decided to help Chennai with its waste management problems, recollects Vajidha. 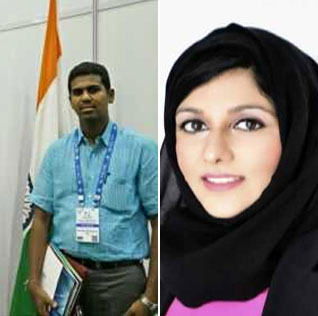 She stayed back in India in 2015 to figure out how she could contribute to manage city’s waste.  After researching about the garbage crisis for a couple of months, she realised that a change can be brought only if there is a change at the grassroot level. She targeted children aged between 9 and 11 and developed an educative-cum-activity based programme. Karthikeyan Murugan, a local retailer who had met Vajidha during flood-relief activities, also joined the foundation as Trustee.

In January 2016, I formally launched the Agal Foundation and having an experience in developing education curriculum, I designed the ‘Thrash the Trash’ project. I chose children, who are young enough to make change in their lifestyle and old enough to understand the reality, says Vajidha.

Also Read: A Government School Teacher In Sikkim Is Sponsoring Education Of Children By Generating Revenue From Waste

How Thrash The Trash Works

The 23-week session is divided into three modules. The first module introduces children to littering problems and how every individual unconsciously contributes to the practice. Different methods like story-telling, singing, poems and drawing are used to spread awareness among children. Teachers and non-teaching staff of the school are given a training on the programme. Teachers are selected as volunteers so that children can relate with them easily. 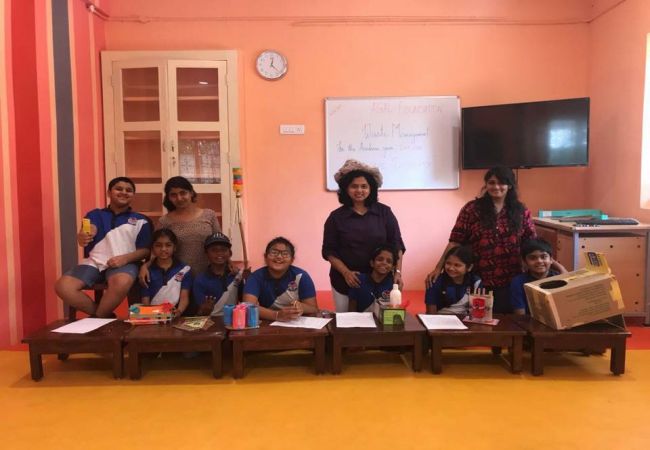 It starts with a storytelling session where children learn values and get entertained with musical beats besides enjoying the story. From then on, the sessions move ahead into instilling fruitful thoughts into the minds of our beloved learners, explains Vajidha. 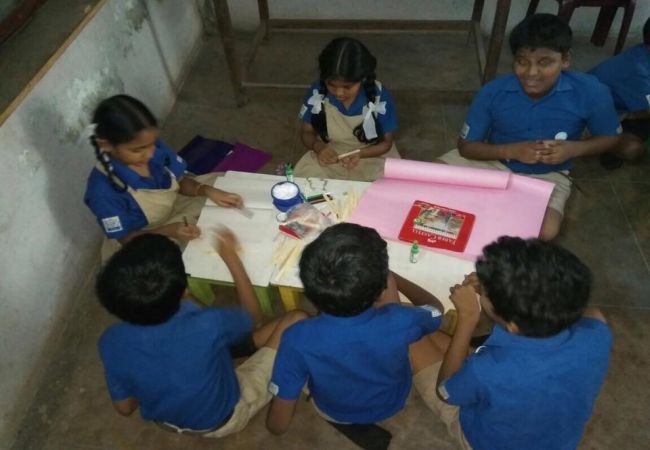 Once the children cross the first module, the volunteers teach the students about the concept of waste segregation as merely lifting the garbage and putting them in a dustbin is not enough. Agal foundation provides every school with a bin to collect paper waste.

Titled as ‘recycle bins’, one bin is placed in every school where we have conducted the programme. The aim is to integrate the concept of ‘waste-to-wealth’ by selling the paper waste to recyclers, adds Vajidha.

In the third and final module, students are asked to bring waste materials from their home and make something useful out of it. 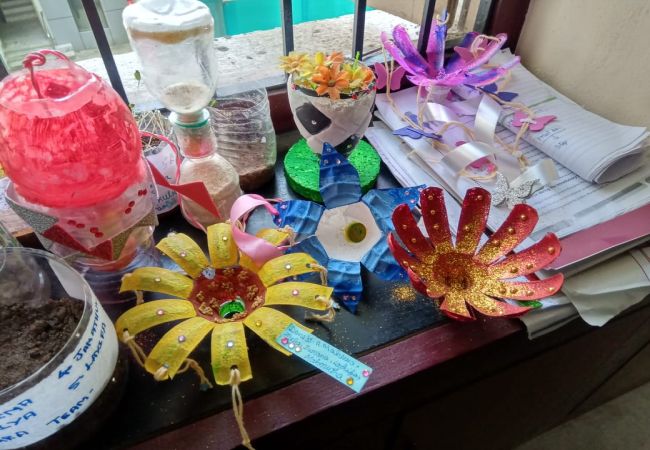 The items made from waste are then given to less privileged sections of the society, thus executing the idea of ‘giving back to the society’.

The students are told about the entire process, right from garbage collected from houses till the final step of disposal. Through Power Point Presentations, newspaper clippings and videos they are shown the images of overflowing landfill and ocean pollution. Post the images, they are told about how the garbage crisis can be averted through reduce, reuse and recycle.

The items made from waste are then given to less privileged sections of the society, thus executing the idea of ‘giving back to the society’.

At the end of the session, students receive a certificate of completion from Agal Foundation and a badge that gives them the license to teach fellow students and teachers in school about the waste management. 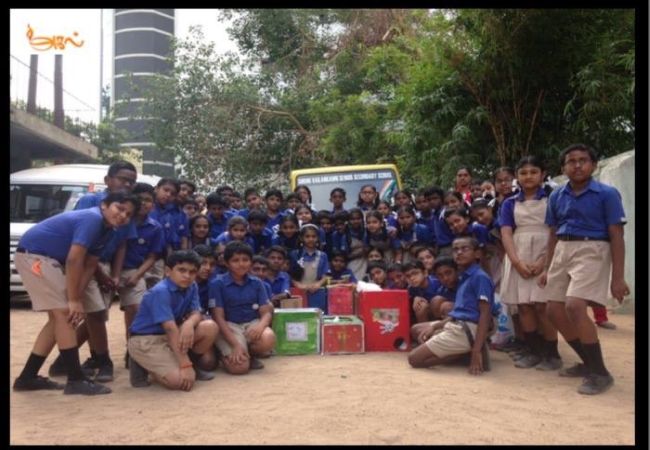 At the end of the session, students receive a certificate of completion from Agal Foundation

The badge works like the monitor badge, where the student can reprimand anyone from the school if he/she is caught littering, says Vajidha.

From next year onwards, Vajidha and Karthikeyan hope to the push the programme on digital platform to reach out to maximum school students possible.

The good part about humans is that they come forward and help each other in tragedies. The flip side is that they only rise to occasion during serious calamities as seen during cyclone Gaja, Mumbai 2005 floods and so on. Every day challenges like the garbage problems are often ignored by people. The realisition that one day we might drown in our own garbage mountain has yet to come. Through our initiative, we are hoping to bring the change in children’s mindsets who are the future.

Foodies Are Welcome, Food Wastage Is Not. A Food Court In Telangana Fines Those Wasting Food