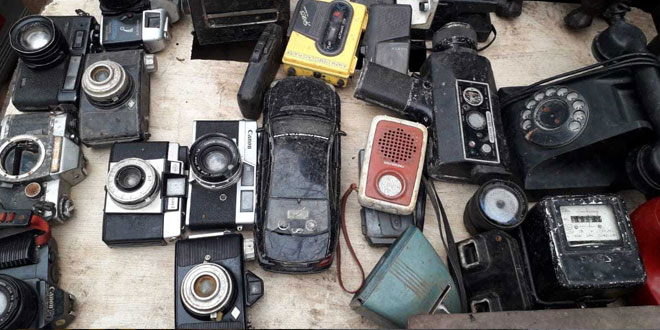 New Delhi: In the year 2009, when Haribaabu Naatesan decided to quit his job as Head of the Animation team at a private firm and set up his own studio, his dream was to do something unconventional, something that would not only give him space to express himself but would also inspire others. It was during this quest for inspiration when Mr. Naatesan discovered his true calling- to create art from electronic scrap. Since then electronic waste became his world, tool, and his muse. He says,

The electronics industry has grown tremendously all over the globe in the last few years. We have seen the remotest of the places become digital and mobile phones and laptops have become necessities of today. But have we ever wondered about the consequences of the growth of electronics in the world and in our lives? This has given birth to another environmental problem- the rising electronic-waste. 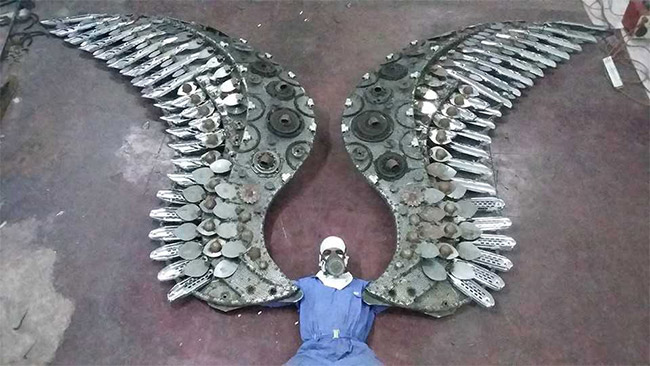 Ever wondered what happens to obsolete walkmans and out-of-date videotapes? To blunt saw blades and to dead cell phones. To ancient floppy discs and fused light bulbs? What happens to what we generally call ‘scrap’? We let these pile up in a corner of a scrap yard, get corroded, emit harmful radiation in the process and become hazardous.

His ‘green-design works’ as he likes to call his art, involves a process of assembling the waste materials collected in the scrap room of his studio, into categories based on size, shape, color, and kind of electronic. He said that he gets electronic waste as small as a wristwatch battery to as big as microwaves and washing machines. He then uses his art to sensibly to put things into places and give a meaning to the creation. 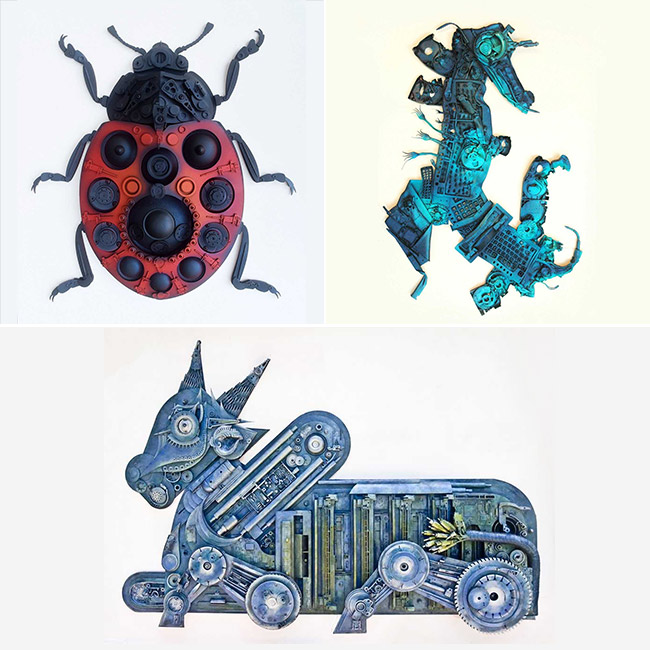 “Science says that matter and energy are neither created nor destroyed, it can just change in form. As an artist, I change the form of the industrial scrap into art”, says Haribaabu Naatesan

Being aware of the fact that India is one of the largest producers of electronic waste in the world, Mr. Naatesan has started spreading his idea and technique of using e-waste among young artists. He says,

The philosophy of my art is to create awareness of reusing e-waste. It is not art for just the art’s sake. I take classes at my studio and conducts regular workshops for young artists to help them learn the techniques of creating eco-friendly art by using things that are discarded and might otherwise end up in landfills. The idea is to recycle, to prevent industrial waste from polluting our planet. 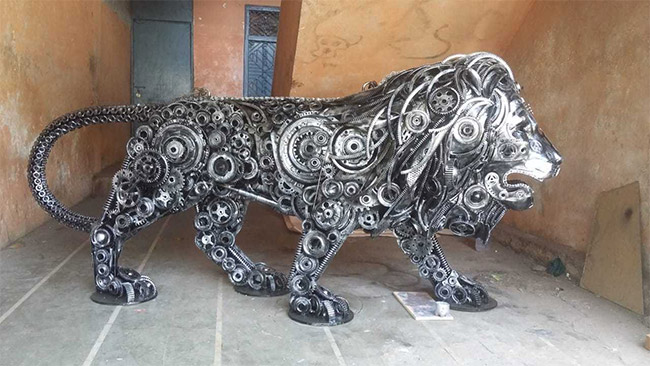 Sculpture of Make in India Logo made from automobile scrap

Exploring the idea of creating green-art further, Mr. Naatesan created green-Ganesha for ‘visarjan’ on Ganesh Chaturthi in 2018. He created a four feet tall idol weighing over 800 kgs out of alum, popularly known as ‘fitkari’, which is a natural ingredient that is known for its purifying capabilities. He says,

Ganesh Chaturthi is one my favorite festivals but every year on this day, I used to feel sad to see water bodies getting polluted due to the plastic used to make the idols. I decided to find an eco-friendly solution. The Ganesh idol made out of alum does not create any pollution and in fact, cleans the waters. By now, it must have cleaned hundreds of gallons of water. 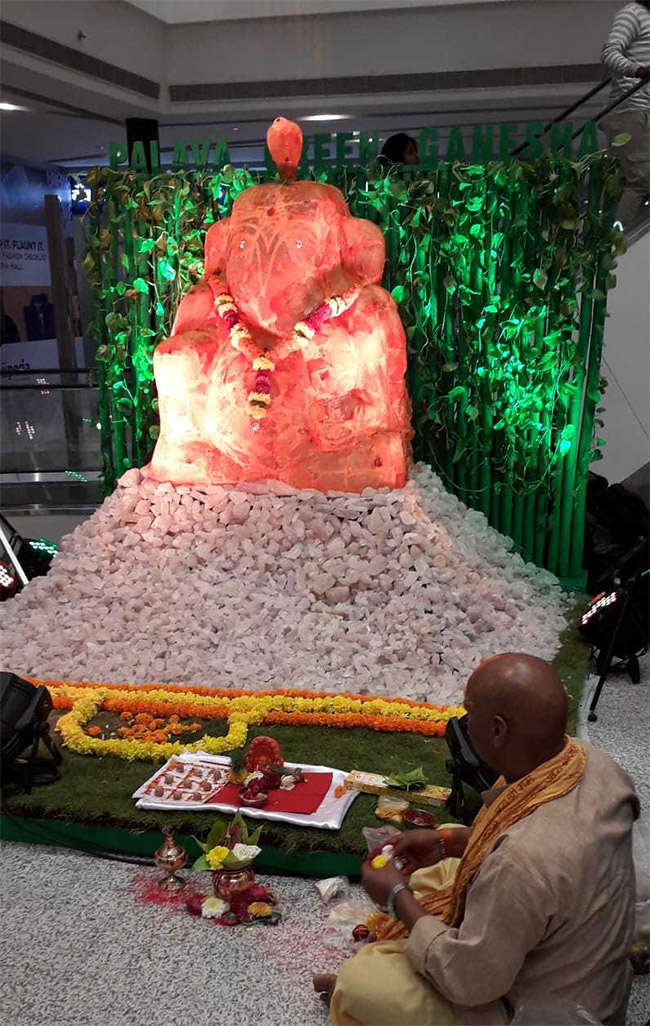 With a powerful message of conservation of the environment, Haribaabu Naatesan created a Ganesh Idol from alum, a mineral known for its water purifying properties

Mr. Naatesan believes in making art simple and engaging for the viewers without them trying to understand ‘what the artist is trying to say’. He said,

My realization through exhibitions is that people get engaged with my art. They try and discover the objects or pieces that I have used in it. My art is for common people. It is understood by all. For example, computer engineers could relate to it by identifying things in my artwork which he comes across in his daily life. Similarly, a kid gets engaged by the toys used in my art. A waiter gets attracted by the toothpicks, stirrer, etc. Girls identify hair clips, pins and other objects in my art. I, as an artist, provoke, trigger, and remind people of their memories. I make my audience locate and look at things in a new perspective. 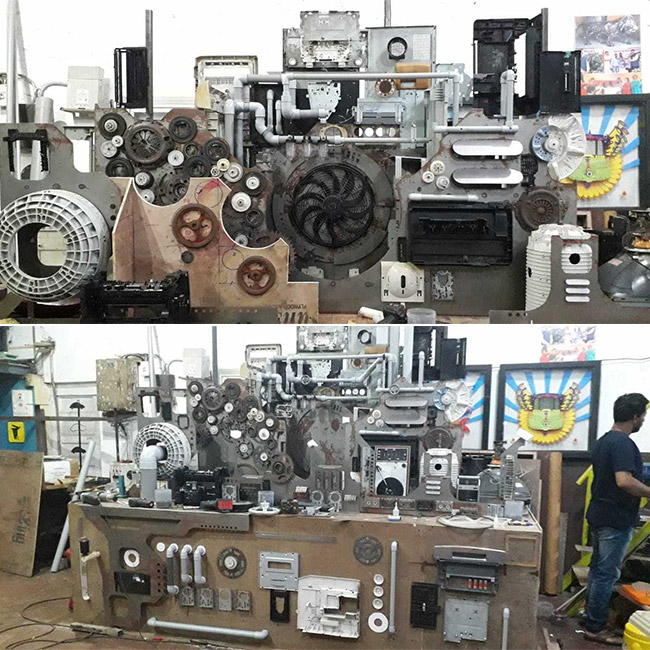 Haribaabu Naatesan’s scrap room in which he arranges the electronic scrap collected from various sources into categories based on size, shape, color, and type of electronic

Relief From Air Pollution: As Heavy Rainfall Washes Away Pollutants, Delhiites Get A Lungful Of Fresh Air