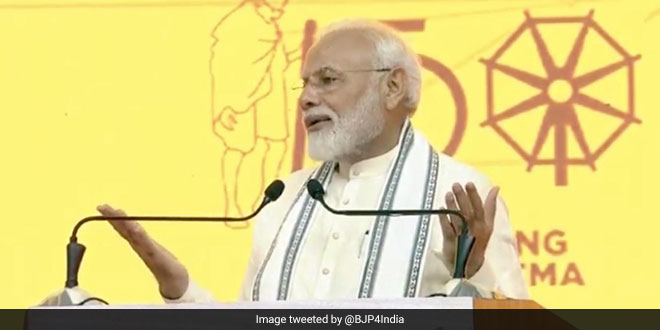 On the occasion of the 150th birth anniversary of Mahatma Gandhi, Prime Minister Narendra Modi on Wednesday declared India to be an ‘open defecation free’ (ODF) country.

Providing toilets to more than 60 crore people in 60 months, building more than 11 crore toilets, the whole world is amazed by this, PM Modi said at a public event in Ahmedabad.

Prime Minister Narendra Modi in Ahmedabad: Today whole world is appreciating and awarding us. Providing toilets to more than 60 crore people in 60 months, building more than 11 crore toilets, whole world is amazed by this. #SwachhBharat pic.twitter.com/Wb5CfDB6kV

I am satisfied that on the occasion of Gandhi at 150, we are witnessing the fulfilment of his dream of ‘Swachh Bharat’. I feel lucky that on this occasion, when India has successfully stopped open defecation, I’m here at the ashram, read the Prime Minister’s message in the visitor’s book at Sabarmati Ashram in Gujarat.

Earlier in the day, Rajya Sabha Deputy Chairman Harivansh Narayan Singh had told ANI that an open defecation free India is a big achievement on the landmark occasion.

No one was ready to believe earlier that India will become open defecation free in such a short period of time. Now, it has become a reality. This is a very big achievement, especially on the occasion of the 150th birth anniversary of Mahatma Gandhi, he had said.

PM Modi paid floral tributes to Bapu during his visit to Sabarmati Ashram. He visited the museum there and also interacted with students.