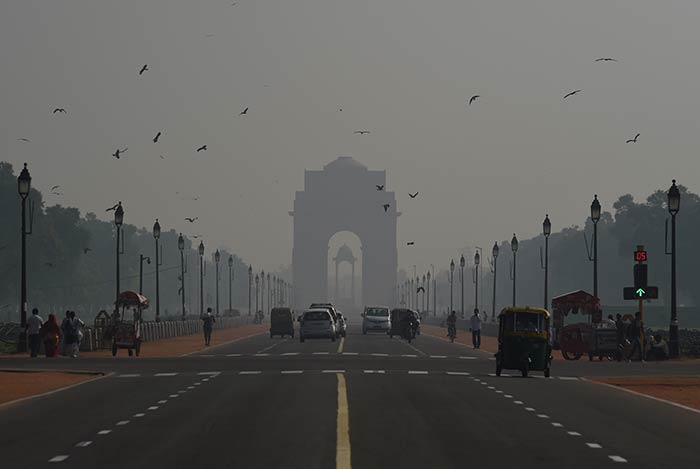 New Delhi: Delhi’s Lieutenant Governor Anil Baijal, held an emergency meeting with Chief Minister Arvind Kejriwal and other officials to discuss measures to be undertaken to deal with the Smog in Delhi. Post the meeting he tweeted stating the measures approved to tackle the deteriorating air quality in the Capital, but did not mention implementation of Odd-Even scheme for regulating vehicular traffic on the roads. The key points of action listed down by Mr Baijal include,

The Central Pollution Control Board (CPCB) and a Supreme Court-appointed environment body had recommended “free of cost public transport” in Delhi for the next few days as the region faces a “pollution emergency“. There doesn’t seem to be a decision on making bus and Metro rides free in the meeting held by the Lieutenant Governor.

The CPCB, which held an emergency task force meeting here, told IANS that a “pollution-clock” was being updated on its portal to monitor the situation closely and impose a “pollution emergency” if PM2.5 remained at the current levels.To impose “pollution emergency”, as recommended under the Graded Response Action Plan (GRAP), the major pollutant PM2.5, or particles with diameter less than 2.5mm, must stay at 300 units or more for 48 hours or PM10 should be at 500 units or more for the same duration.

According to CPCB officials, the pollution emergency clock had been ticking for the past 24 hours and PM2.5 currently was 18 to 30 times the safe range in all the areas across Delhi-NCR after noon. By evening, this has been upgraded to “beyond severe” levels. Earlier, the apex court-appointed Environment Pollution Prevention and Control Authority (EPCA) barred the entry of trucks to Delhi and levied a parking fee four times the normal rates.

But there have been issues with the implementation as the “stakeholders fail or deny to implement the directives for various reasons”, added the officials. He further added,

As Delhi-NCR passes through one of the worst smog situations, which is likely to prevail for at least two more days, emergency steps with several restrictions are being put in place by EPCA. However, officials both at CPCB and EPCA say that while they had been passing orders and instructions, the same were not being adhered to or enforced by the implementing bodies.

There have been failures and there is no doubt… We have been issuing instructions and recommendations but there are issues with implementation, like farmers in Punjab are not bothered (about stubble burning) at all, said Sudhakar.

“EPCA passes orders and is the implementing authority but it cannot ensure their enforcement… The main issue is that the stakeholder, including the local agencies, accept the orders but then fail to implement,” said Polash Mukherjee, Research Associate at the Centre for Science and Environment (CSE), an EPCA member.

(With Inputs from IANS)

No Improvement In The Air Quality, Delhi-NCR Continues To Breathe Toxic Air