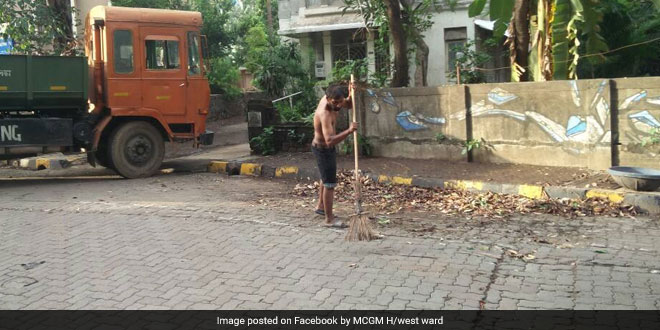 New Delhi: Three trucks of green waste often referred to as plant/tree waste were dumped under the cars in Bandra’s Rebello colony which led to blockage of roads. Along with the green waste, debris in large amounts was also dumped on the same road by the residents living in nearby premises said M. K Mhaske, Assistant Engineer, Solid Waste Management, Brihanmumbai Municipal Corporation (BMC). The issue came to light when actors Pooja Bhatt and Dia Mirza raised the issue on twitter.

Emphasising on the need to develop civic sense towards keeping the surroundings clean, Pooja Bhatt tweeted, “More signs of apathy & proof that education seems to have nothing to do with civic sense. #StRoquestreet #Veronicaroad #Rebelloroad #Bandra.”

More signs of apathy & proof that education seems to have nothing to do with civic sense. #StRoquestreet #Veronicaroad #Rebelloroad #Bandra pic.twitter.com/3xNgFJg2Xw

Soon after, Dia Mirza registered a complaint with BMC’s H/West Ward and within 30 minutes the Mr Mhaske deployed a team of 10 labourers along with a truck and an earth digger machine. All the green waste was later sent for processing and debris was dumped at the nearby dumping yard.

Mr Mhaske had to co-ordinate with the traffic police as all the cars had to be towed, “I had to personally come down to remove all the cars. Once all the cars were removed, the waste materials were cleared by the machine and our workers swept the entire road making it spic and span,” Mr Mhaske said.

The generation of green waste is a rising problem during monsoons said Mr Mhaske, “Heavy rains uproot alot of plants and trees in societies and often people do not report it to the civic body and dump it outside their residential complexes.”

The BMC has levied a charge of Rs 3000-4000 for picking of green waste and debris from the premises. However, societies which have hundreds of families refuse to pay the amount and hence the waste remains accumulated on the roads or footpaths.

The fee charge is the minimal charge which we have imposed and yet people refuse to pay and throw the uprooted plants onto the roads. And when it causes health effects, we are usually blamed for it, said Mr Mhaske.

To tackle this problem effectively, the BMC has circulated guidelines to every society in the H ward with respect to disposing of green waste. In addition it has provided them with phone numbers where residents can post complaints and pictures on WhatsApp.

Both the actors later praised the efforts of the BMC for taking a prompt action towards clearing out the green waste.