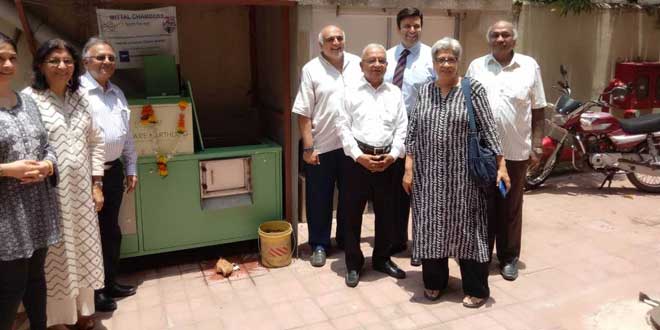 New Delhi: On World Environment Day this year India kicked off  a nationwide waste segregation campaign adopting the two-bin segregation system – one bin for wet waste and the other for dry or non-biodegradable waste. The segregation campaign is not just for residential colonies but also commercial establishments to ease the pressure on the overflowing landfills across India. Looks like one of Mumbai’s posh commercial buildings has already integrated waste segregation and is on its way to unburden the Deonar landfill.

Mittal Chambers in Nariman Point aims to reduce 16,000 kilos of its wet waste through composting by end of 2017.The Clean India Foundation NGO in collaboration with the Nariman Point Association (NPA) on June 15 inaugurated a composting plant that can convert wet waste into compost within 24 hours. There are about 100 plus small companies functioning in the complex and they generate nearly 50 kilos of wet waste on a daily basis. Of the 50 kilos, 15 per cent of it will become manure. This manure will be used either in in gardens of Mittal Chambers or office staff can take them home and the surplus will be handed over to the Brihanmumbai Municipal Corporation (BMC).

The initiative taken is a part of the Save Deonar Project that was undertaken in 2016 after a fire erupted at city’s largest dumping ground. It was the 11th  reported incident caused by presence of methane gas that led to the fire.

The volume of waste has increased so much on the Deonar landfill that is not possible for the BMC to entirely tackle it. Hence, a group of us came together and started the project. The aim is to reduce the garbage generation at primary levels, said Kunti Oza, Chairperson, Clean Mumbai Foundation.

Before implementing this project the foundation imparted training of waste segregation to all the staffs and managers of all the companies located in Mittal Chambers for 8 months, “We went from office to office and made people aware on the need to segregate waste. Training was given to everyone,” said Jayson Nadar, Manager, NPA.

Mr Nadar further added, Since years of untidy management of waste has been responsible for the fire in overburdened Deonar dumping yard.  Hence this step was necessary to manage the waste.

Along with unburdening the landfill, this composting plant will also benefit the civic body as the landfill site is 32 miles away from ward A under which the Mittal Chambers fall. ‘If all the offices in Nariman Point come forward and implement composting it can reduce BMC’s transportation cost,” said Ms Oza.

10 more buildings in city’s commercial hub – Nariman Point have approached the NGO for installing composting units. “Once we test each of these buildings we will install units based on their volume generation,” said Ms Oza.

When asked if there was any specific motive behind approaching the commercial buildings Ms Oza said, When we initiate the practice of waste segregation in office staff they will further implement it in their respective houses or residential areas. Thus, in this way we are ensuring that a huge number of people take steps towards reducing waste generation.

Problems Of Segregation: Why Waste Segregation Is Not Catching Up In Chandigarh