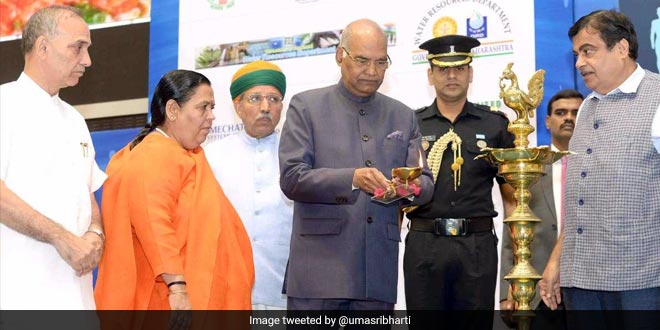 For years now, the water crisis in India has been taken up with seriousness, especially the state of both surface and ground water in the country. With India’s estimated population of 1.7 billion by 2050, the pressure on water resources will be huge, hence the emphasis over the last few years has been to clean up India’s rivers, so that enough water resources are available in the country over a period of time. Dealing with several aspects of India’s water issues was stressed upon at the inauguration of the 5th India Water Week on October 10, organised by the Ministry of Water Resources, River Development & Ganga Rejuvenation.

The programme will see intense discussions for five days on a variety of topics related to water, including the cleaning of the Ganga and the interlinking of rivers. Also present at the inauguration was Nitin Gadkari, Union Minister for Water Resources, River Development & Ganga Rejuvenation. Stressing on interlinking of rivers, Mr Gadkari said that 30 such projects plans have been drawn to interlink rivers with one another to deal with water scarcity and protect people against floods and droughts, out of which three projects on Ken-Betwa, Tapi-Narmada and Daman Ganga-Pinjal will start by January 2018. Mr Gadkari also said that by next year, 285 new irrigation projects will be taken up by the Ministry.

Wastewater is a big problem in India but if we utilise it well, it can be beneficial for us. We have plans to utilise wastewater for NTPC plants. Used river water which is directly disposed into the seas can be a great source for powering thermal plants. If we can successfully use wastewater for such purposes, we can lessen the pressure on freshwater sources, said Mr Gadkari.

It is a matter of grave concern that ground water level is going down critically. We have misused and abused ground water. We will have to respect water, rivers and ground water and make our rivers Aviral and Nirmal, said Ms Bharti.

The theme of the conference this year is water and energy for inclusive growth, and will focus on how water resources can be utilised across all social spectrums to ensure that there is now wastage and can strengthen rural communities’ economic frameworks as well. Representatives from the European Union will also be present at the conference, sharing experiences of how communities from Western nations have successfully utilised water resources, as well as clean up some of the most heavily polluted rivers.

We have specially invited some delegates from European countries where water management and cleaning up of rivers has seen success. This will be a huge platform where ideas and knowledge can be exchanged so that we can also learn from successful European examples and implement the same, said Samir Sinha, Spokesperson, Ministry of Water Resources.

It can be hoped that interaction with globally successful ideas on river conservation could bring in some significant changes in the water scenario in India. While miraculous turnarounds seem improbable, the five-day long conference and discussion sessions can see changes in water policies, having a long term impact on India’s water scenario.

Related Topics:
Ministry of Drinking Water and Sanitation River Clean Up Water Pollution
Up Next