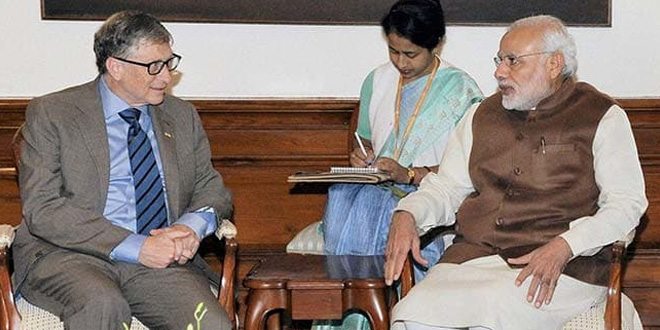 New York: Prime Minister Narendra Modi will be honoured later this month with the prestigious ‘Global Goalkeeper Award’ by the Bill & Melinda Gates Foundation for his leadership and commitment to the Swachh Bharat Abhiyan. Sources told PTI that PM Modi will be presented with the 2019 ‘Global Goalkeeper Award’, which according to the Foundation is a “special recognition” that celebrates a political leader who has “demonstrated their commitment to the Global Goals through impactful work in their country and/or globally”.

PM Modi will be honoured for his leadership of the Swachh Bharat Mission, which he had launched on October 2, 2014. The ambitious mission aims at accelerating the efforts to achieve universal sanitation coverage in the country by this year, as a tribute to Mahatma Gandhi on his 150th birth anniversary.

So far, as per government data, 9.5 crore toilets have been built under the mission to eliminate open defecation and attain universal sanitation coverage by October 2, 2019. As per the Economic Survey 2018-19, Swachh Bharat Mission is one of the largest cleanliness drives as well as an attempt to affect the behavioural change in the world.

Through SBM, 99.2 per cent of rural India has been covered in the last four years. Since October 2014, over 9.5 crore toilets have been built all over the country and 564,658 villages have been declared open-defecation free (ODF). As of June 2019, 30 States and Union Territories are 100 per cent covered with an individual household latrine (IHHL). The SBM has significantly improved health outcomes, the survey says.

This is not the first time that Bill Gates has taken cognizance of PM Modi’s efforts towards Swachh Bharat Abhiyan, as last year he had praised the PM’s leadership for the improvement in the sanitation coverage in India.

The leadership of @narendramodi and the Indian government has played an important role in improving sanitation. Now is the time to build on the success of @swachhbharat. https://t.co/HKXapJxQ3x

The Foundation will host the fourth annual Goalkeepers ‘Global Goals Awards’ on September 24. The annual awards, in five categories, are presented to leaders and individuals for their efforts in achieving the Sustainable Development Goals (SDGs).

These Awards tell the extraordinary stories of remarkable individuals taking action to bring the Global Goals to life and help achieve them by 2030, the Bill & Melinda Gates Foundation said adding that this year, Goalkeepers will focus on the challenge of fighting global inequality to ensure that no one is left behind.

Poshan Month: People From Across The Nation Lead The Fight Against Malnutrition By Participating in ‘Poshan Maah 2019’