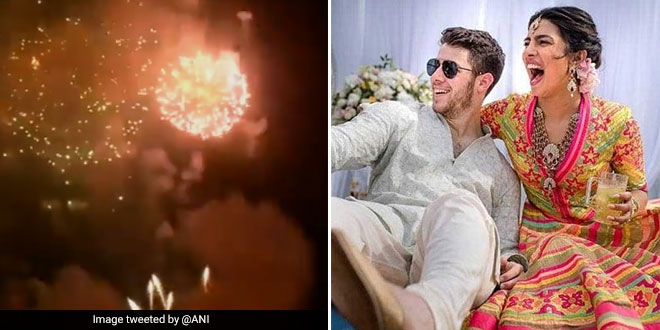 New Delhi: After ‘oh-so-colourful’ mehendi and vibrant sangeet ceremony pictures, as the world awaits to see Priyanka Chopra as a bride and American singing sensation Nick Jonas as a groom in a desi avatar, a video showing massive fireworks from the ceremony of December 1, sparked of major trolling. The couple exchanged wedding vows in a Christian ceremony in Udaipur’s Umaid Bhawan Palace and minutes after the Jodhpur sky was lit up with the synchronised firework that was displayed for hours.

#WATCH: Fireworks at Umaid Bhawan Palace in Jodhpur, Rajasthan, after Priyanka Chopra and Nick Jonas tied the knot as per Christian rituals. pic.twitter.com/XpzYtGZG2G

Taking note of the bursting of firecrackers as part of her wedding celebrations, Twitterati reminded the actress of her own anti-pollution and asthma campaigns and labeling her as a ‘hypocrite’.

The Bollywood star and UNICEF’s Goodwill Ambassador Priyanka Chopra just a month ago was actively campaigning for better air quality, pleading her fans to “Skip bursting crackers this Deepawali”, she even admitted being asthmatic and how bursting crackers can affect her and people suffering from asthma. Last month, through a video message, she went on to encourage people to be mindful of animals and people with respiratory problems and not burn crackers on Diwali. She said, “Celebrate with lights and laddoos instead.”

Here are some of the reactions:

@priyankachopra and all other bollywood stars, wat say abt this hypocrisy???

U do fireworks wen u need but v cant on one day a year????#PriyankaKiShaadi pic.twitter.com/XE8TxWhofb

The double standard hypocrites are huge in numbers
Cant hear anyone opposing firecrackers at Christian wedding of @priyankachopra https://t.co/fS545yDA6x

Btw, @priyankachopra, could you share tips on how an asthmatic like you, survived the pollution caused by firecrackers at your own wedding? Do you know @ibreathefree? @Cipla_Global maybe had some magic pill? https://t.co/nIPOmJSndx

Not cool, @priyankachopra
You as an asthma patient should have known better than to shoot firecrackers after your wedding. We all need to be responsible even when it's not Diwali. https://t.co/Tu2qQqurMf

Are Farhan and priyanka sporting same mask after dazzling firecrackers at umaid palace at her wedding celebrations like they did after Diwali ; congratulation ⁦@priyankachopra⁩ pic.twitter.com/X2O4orqoWd

@priyankachopra is a hypocrite, being the face of anti-pollution #campaign durin #Diwali, and yet bursting firecrackers for hours during her wedding celebrations. https://t.co/plCG6R8mmK pic.twitter.com/RuVzwBgSkM

Air Pollution: CPCB Issues Notices To EDMC and SDMC for Inaction, Asks Why Shouldn’t They Be Prosecuted