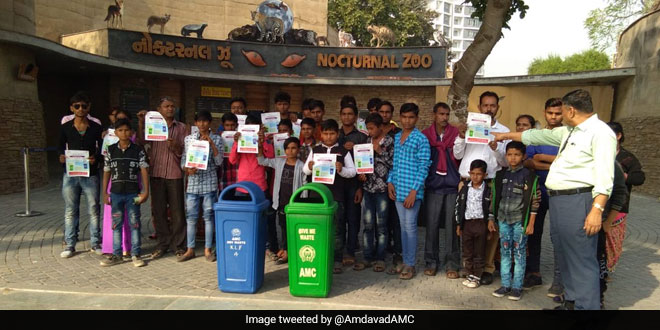 Mumbai: On most Sundays, the residents of Ahmedabad can be found to start their day early to relish the much-loved combination of fafda-jalebi (a popular Gujarati snack combination consumed for breakfast) and then lazing through the rest of the day. However, the Sunday of December 2 was different. The residents woke up to a mega awareness drive on waste segregation. They not only witnessed the drive but also participated in it actively. Thousands of civic workers from Amdavad Municipal Corporation (AMC) marched towards buildings, corporates, public gardens, railway and bus stops around 7AM and carried out awareness sessions all through the day.

Door to door campaign being conducted by #AMC team in various societies across the city on importance of #SegregatedWaste.

The drive was conducted to implement the new rule on waste management effectively. As per the new rule, the AMC will not collect waste from households if it is not segregated into dry and wet waste. Nearly 40,000 people including sanitation workers, NGOs, Self-Help groups were part of the drive. The move comes in ahead of Swachh Survekshan 2019. Under the nationwide cleanliness survey, 65 marks are allotted to the waste segregation category.

To implement 100 per cent waste segregation and curtail the quantum of waste burden on landfill, the AMC will not collect waste from December 3, if it is not separated into dry and wet waste. Around 15 lakh households will be covered under the new rule of waste segregation, says Harshadray Solanki, Director of Solid Waste Management, AMC.

Talking about the facility made to ensure that the wastes do not mix up when transported to the landfill, Mr Solanki says, “We have already made a provision of transporting the waste separately through our municipal trucks. The vehicles will have internal compartments for easy collection of dry and wet waste.”

AMC undertook various activities ranging from street plays, demonstration workshops to waste-management related games. The drive was initiated in over 250 gardens and later covered residential complexes, malls, cinema theatres and so on.

Hundreds of people visit public parks early in the morning for walks and other fitness related activities. We took advantage of that and had one-on-one conversations with the people. The workers also demonstrated waste segregation, said Rajpal Gada, one of the civic workers.

AMC Commissioner, Vijay Nehra also conducted an awareness session in city’s Piramal garden and later in malls where he made an appeal to the citizens to help Ahmedabad become a clean city,

People from various walks of life worked hard to make the drive successful. Our aim was to tell people that scientific treatment of waste is possible if source segregation is practised diligently. We received a positive response from people and reached out to around 12 lakh people, said Mr Nehra.

Several games related to waste management were played in public parks to teach children about segregation. The civic workers displayed biodegradable and non-biodegradable wastes in the parks asking the children to drop the waste in the blue or green bin and points were allotted accordingly.

To spread awareness, a group of sanitation workers covered whopping 900 public buses across the city. In every bus, the workers told the passengers about the new rule and addressed people’s doubts.

Currently, the city generates nearly 4,000 tonnes of waste on a daily basis, out of which half of the waste is either recycled or composted. The city, at present, has three composting plants which composts 1,200 tonnes of waste daily. To scale up waste segregation in the largest city of Gujarat and to decompose the other half, the AMC will take multiple steps from making every resident of the city aware to installing solid waste-to-energy plants, according to Mr Solanki.