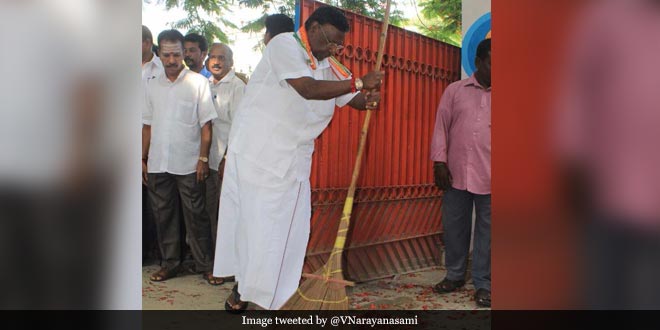 New Delhi: Looks like the Union Territory of Puducherry is rigorously implementing the ‘follow your leader’ mantra in Swachh Bharat Abhiyan, Chief Minister V Narayanasamy being the latest minister to set an example. Chief Minister Narayanasamy marked Onam, a festival widely celebrated in South India by wielding a broom and sweeping the premises of Manimegalai Government Girls Higher Secondary school in Nellithope constituency.

The chief minister was accompanied several constituency workers for the inspection that was conducted in government schools and streets on September 4. He also examined his constituency to see if litter from roads weren’t swept and accumulated in any corners.

Checking various streets at our Nellithope Constituency at Puducherry pic.twitter.com/egMwJzHUNe

Lieutenant Governor Kiran Bedi has been cycling to office every morning to pass on a message to the citizens that the city is clean enough for people to walk and cycle. Being an active participant of ‘Clean Puducherry Mission’, she also organises weekly visits to various rural, suburban and urban localities.

In the recent Swachh Survekhsan, cities of Puducherry were ranked poorly with the Puducherry at 180 and Ozhukarai at 206. Of the four districts in Puducherry, Mahe was recently declared Open Defecation Free (ODF). Inoroder to achieve the target ODF by October 2 this year, the local government is adopting several innovative steps and making changes at the policy level. For instance, on Independence Day, Lieutenant Governor Bedi unveiled a 10 point action plan for religious leaders to ensure that sanitation is given a priority. The administration had last month sent out a circular stating that families, who are availing the toilet subsidy, will be kept out of all government welfare schemes if they do not construct a toilet before September 30.

E-Waste Generation May Increase By 1800 Per Cent, Says ASSOCHAM-KPMG Report