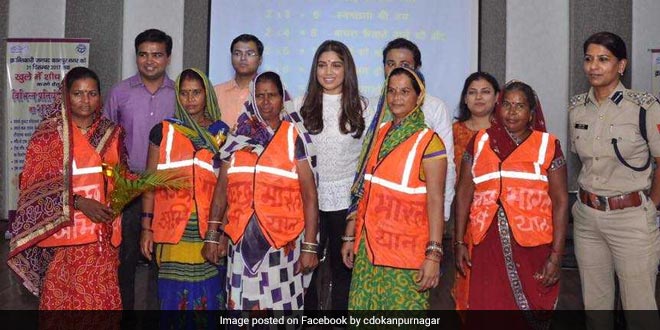 New Delhi: Taking forward Toilet- Ek Prem Katha’s message on the need to build a toilet at home, actor Bhumi Pednekar recently flagged off an intra-district competition in Kanpur, Uttar Pradesh under the Swachh Bharat Abhiyan initiative. During the launch, the actress praised the anti-lota party that is bringing about a behavioral change towards open defecation in Kanpur. The actress posted pictures on twitter about the event that was held at a local school, “The Anti-Lota party stops people defecating in the open by flashing their lights or making noise #NoOpenDefecation @ToiletTheFilm”

In a bid to speed up the process of ODF, the Kanpur Nagar Nigam (KNN) earlier this year formed the anti-lota gang, which interestingly is exactly opposite to the ‘Lota Gang’ that got famous in the Akshay Kumar and Bhumi Pednekar starrer. While women were forced to join the lota gang for defecating in open in the movie, women in Kanpur are curbing the practice of open defecation with torches and whistles as their weapons. 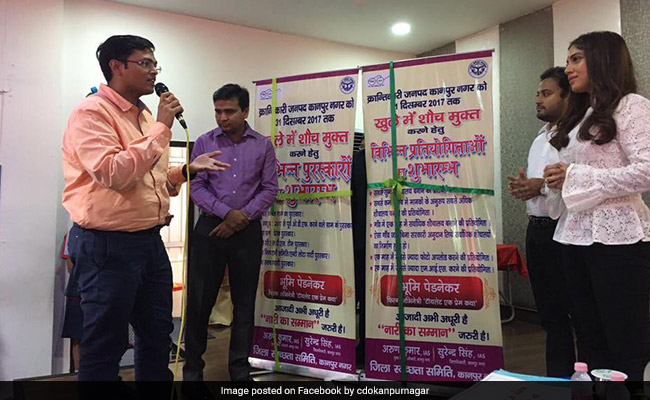 A Swachhta competition will be held in the Kanpur district

Talking to NDTV, the Chief Development Officer of KNN Arun Kumar says, Every village in Kanpur has atleast 1 anti-lota party consisting of women and children. Every morning from 4 onwards the party monitors areas in their respective villages and stops people from defecating in open. They start whistling or making noise if they spot anyone defecating in open. Besides, the gang is also responsible for making a presentation on ill-effects of poor sanitation before we start the process of constructing toilets.

The swachhta competition, which aims to push forward the dream of an open defecation free (ODF) region will conducted for next 3-4 months in more than all the villages of the district. The special ‘Clean India Mission’ vehicle flagged off by the actress

The motive of organising competition is to break the generation old practice of open defecation says Mr Kumar. People will be awarded under categories like ‘Most Innovative toilet’, ‘fastest toilet construction’ at the end of the competition. A special ‘Clean India Mission’ vehicle which was also flagged off by the ‘Shubh Mangal Savdhan’ actress will go on rounds every day making people aware about the competition.

When asked what is the biggest challenge in perusing the goal of ODF, Mr Kumar says, Constructing toilets, procuring subsidies are secondary concerns for us. Making people use the toilet is a herculean task as for years now people have been defecating in open. Hence we adopted innovative steps like the anti-lota gang and competitions. 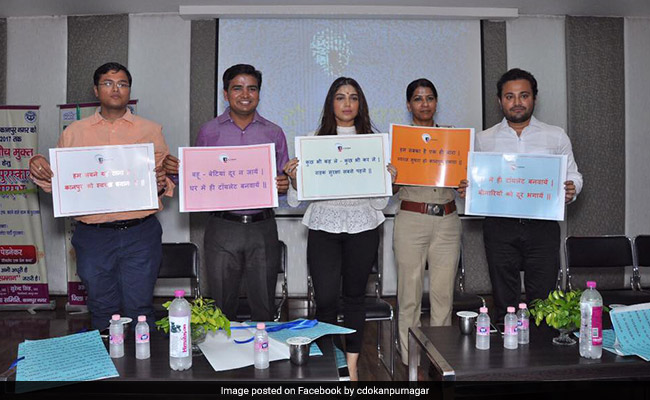 The civic body had last year introduced remote controlled drones to keep a vigil on people who defecate in open. Several people were fined after they were captured defecating in open in the drones.

Of the total 284 villages in Kanpur, 123 villages and all the 56 villages along the banks of Ganga have already been declared ODF. The district needs to construct 1.5 lakh toilets by end of this year to go ODF.

Also Read: To Make Urban Uttar Pradesh Open Defecation Free By 2022, Additional Assistance Of Rs. 12,000 Will Be Given Per Toilet