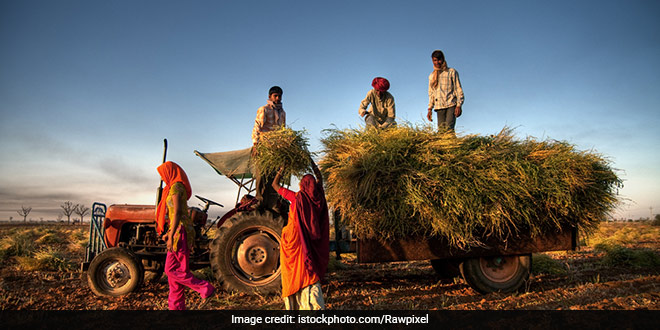 Fatehgarh Sahib: A Punjab farmer has been sowing wheat directly into the hard soil of his fields amid the residue paddy stubble without ever burning it since 2001 and getting up to 2.5 quintals of higher crop yield per acre. Meet Surjeet Singh of Sadhugarh village in Fatehegarh Sahib district, who demonstrated Tuesday his progressive farming techniques called Super Straw Management System (SMS) in presence of District Deputy Commissioner Shiv Dular Singh Dhillon, using a “seeder”.

Mr. Singh made the demonstration amid the persisting problem of stubble burning, which pollutes air in the entire northern states, including the NCR, every winter and won instant praise of the officer for showing way out of the problem.

Also Read: This Group Of Ingenious Farmers In Punjab Have Not Burned Their Farm Waste Since Ten Years

Under the straw management system, wheat can be sowed directly in hard soil amid the standing stubble with the help of a machine, commonly known as Happy Seeder, without burning the stubble and tilling the land afresh, said Singh. It saves the cost of diesel for tilling the land, said Mr. Singh, adding farmers don’t even need the pre-sowing irrigation and end up having higher crop yield from 2 to 2.5 quintal.

Farmers get higher crop yield because the residue paddy stubble serves as nutrient for the new crop on decomposition, he explained, adding one does not need pre-sowing tilling and irrigation either as the seeds can be directly drilled into hard soil by “Happy Seeder”.

The SMS farming further tackles the problem of falling water table in the area as post-sowing, the crop can be watered by rain guns just for 40 minutes per acre, he said. The residue stubble, in turn, traps the water and besides preserving it for the growing crop uses it for its own decomposition to further serve as nutrients, he explained.

Mr. Singh said he has never burnt paddy straw since 2001 and is constantly practising resource conservation technology to manage crop residue produced on his 45 acres farm. The SMS farming results in countless economic benefits in terms of reduced input costs like less fertilizer, less irrigation requirement and helps in the improvement of soil’s organic health, he said.

It entirely tackles the problem of stubble burning and subsequent environment pollution, he added.

Appreciating Mr. Singh’s efforts, District Deputy Commissioner Dhillon said the administration would take steps to encourage farmers in the state to follow Mr. Singh’s progressive ways of farming and be benefitted by it, besides meeting their social responsibility to preserve environment.

Swachh Rail: Trains With Bio-Toilets To Have Dustbins By December 2018