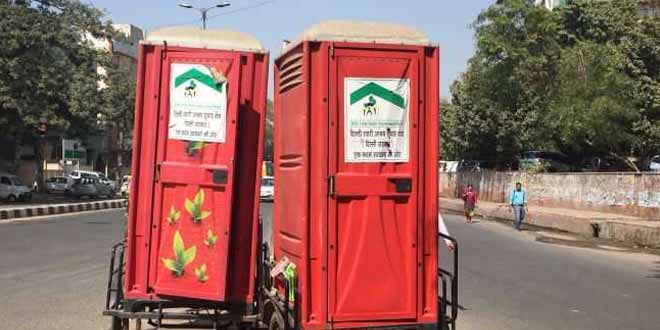 Ever since Delhi’s poor performance in this year’s Swachh Survekshan rankings, the city’s civic bodies have been trying several possible measures to better the sanitation scenario in the city. The South Delhi Municipal Corporation (SDMC), which ranked a low 196th among the 434 cities surveyed, has been long plagued by lack of toilets, especially in urban clusters of habitations. Lack of enough space and water supply has often been cited as the reasons behind the difficulty SDMC has faced in constructing toilets. To deal with the problem of wards where open defecation is still a rampant practice, SDMC has decided to install mobile toilet vans to eradicate open defecation.

In May 2017, SDMC had declared 92 of its 104 wards as open defecation free (ODF). Despite being allocated an amount of Rs 31.63 crore, SDMC could manage to spend only 0.25 per cent or Rs 7.93 lakh of it in the financial year 2015-16 as SDMC had no funds of its own and was reluctant to begin work without having both the Central as well as civic funds. However since last year, the SDMC has taken some initiatives to tackle open defecation. The initiative to install mobile toilet vans has been on the civic body’s radar since August 2016, when previous mayor Shyam Sharma had announced the idea of installing mobile toilets. The toilet cabins are made of fibre, each costing somewhere between Rs 15,000 to Rs 20,000`and each toilet has 5 cabins. Mobile toilets are a better idea to implement for the SDMC, as many households in wards under SDMC’s jurisdiction do not have adequate space to install individual household toilets (IHHLs). For people residing in such areas, mobile toilets will ensure that they have regular access to sanitation facilities.

In houses in slums, construction of individual toilets is a problem due to space constraints. With mobile toilets installed every 500 metres, people can easily use them. These toilets will be fully functional and people no longer need to defecate in the open, said G.S. Meena, Additional Commissioner, South Delhi Municipal Corporation.

On July 14, the SDMC put up a tender to install the 100 mobile toilet vans across its 104 wards. The total cost of the project is estimated to be around Rs 12 crore. The slum clusters of Okhla, Nizamuddin and Tughlakabad have been specially earmarked by SDMC for installation of mobile toilets. The mobile toilet van would be placed in critical areas with high density of open defecation. They would also be cleaned up every alternate day so that users are not forced to use unclean toilets. Mobile toilets would also be placed at places like Sangam Vihar and Deoli, where the presence of sewer lines is minimal and thus, installation of toilets becomes more difficult.

The Swachh Bharat Mission (Urban) guidelines clearly state that an urban local body can declare its wards ODF only if at least 75 per cent of the geographical area of a ward has enough public toilets. It also states that wards where slum settlements are more in number, there should be a public toilet for usage every 500 metres. On declaring 92 of its 104 wards ODF, the SDMC found out during an inspection that people living in slums were still defecating in the open. The SDMC had also met officials from Delhi Urban Shelter Improvement Board (DUSIB) and Railways to discuss the issue of open defecation in slums along the railway tracks.

We requested DUSIB and the Railways to speed up construction of toilets along railway tracks to ensure that people did not have to defecate in the open. But acquisition of land for toilet construction is a complicated process involving multiple authorities. Hence, it was decided that to meet the ODF target, mobile toilet vans would be a speedier and equally effective measure, said Mr Meena.

October 2 has been chosen as the date to declare Delhi as ODF and the capital’s not so sound performance on sanitation has been a problem for its several civic authorities. For SDMC particularly, the challenges have been wide, as many below poverty level (BPL) families living in its wards have been unable to construct toilets. SDMC zonal offices allow submission of only online applications for receiving subsidy of Rs 4,000 on constructing toilets. BPL families find it difficult to complete the process of application online. Further, the amount to be provided as subsidy is too low compared to the costs incurred to build a toilet, which amounts to Rs 10,000. In such cases, open defecation remains the only option available to people residing in slums.

The mayor has said that our offices will accept subsidy applications even if they are made on paper. But the cost to build a single toilet is in most cases beyond affordable for most of these families. Public and mobile toilets is a practical option which we can implement now to declare the city ODF by October 2, said Mr Meena.

In its quest to meet the ODF target by October 2, SDMC has also began arranging for awareness camps in areas with high open defecation figures. The areas declared ODF by SDMC will undergo a further inspection by a team from the Ministry of Urban Development (MoUD) before they are handed the ODF certificate. To ace the MoUD’s inspection, SDMC will face significant challenge in ensuring that open defecation is a forgotten practice across all its wards.

A Toilet Is A Necessity, It Is Everyone’s Birthright To Have One: Bhumi Pednekar, Actor of Toilet – Ek Prem Katha