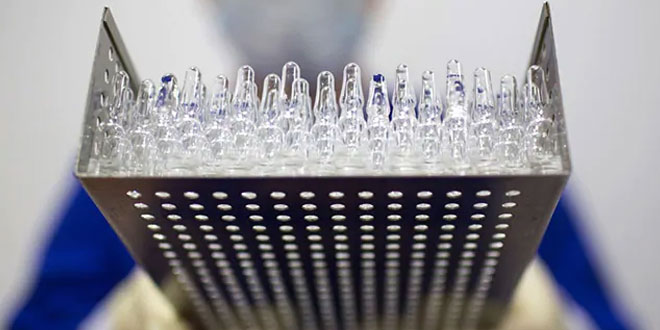 Chicago: After developing and rolling out COVID-19 vaccines at record speed, drugmakers are already facing variants of the rapidly-evolving coronavirus that may render them ineffective, a challenge that will require months of research and a massive financial investment, according to disease experts. Executives from Moderna Inc and Pfizer Inc and partner BioNTech SE are considering new versions of their vaccines to respond to the most concerning variants identified so far. That is just one piece of the work needed to stay ahead of the virus, nearly a dozen experts told Reuters.

A global surveillance network to assess emerging variants must be built. Scientists need to establish what level of antibodies will be required to protect people from COVID-19 and determine when vaccines need to be altered. And regulators must convey what is needed to demonstrate updated vaccines are still safe and effective.

At this point, there is no evidence that these variants have changed the equation in terms of protection from the vaccine. But we have to be prepared for that, said Dr. Michael Osterholm, an infectious disease expert at the University of Minnesota.

Johnson & Johnson told Reuters the concerning variant first identified in South African has got its attention and will tweak its vaccine accordingly if needed. Pfizer said it could produce a new vaccine relatively quickly, but a top vaccine executive said manufacturing it presents additional challenges.

The urgency of this effort is clear.

Moderna on Monday (January 25) said lab studies showed antibodies made in response to its vaccine were six times less effective at neutralizing a lab-created version of a South African variant than prior versions of the virus.

A study released on Wednesday (January 27) ahead of peer review found the South African variant reduced neutralizing antibodies 8.6-fold for the Moderna vaccine and by 6.5-fold for the Pfizer/BioNTech shot, although a separate Pfizer-backed study released on Wednesday suggests its vaccine may be more hardy. Moderna said this week it is starting work on a potential booster shot.

Just how far protection can drop before a COVID-19 vaccine needs to be altered is not yet known. With influenza, an eightfold drop in vaccine-induced antibody protection means time to update. That does not necessarily apply to this coronavirus.

“The problem is we don’t know what the cut point is for coronavirus,” said Dr. John Mascola, director of the Vaccine Research Center at the National Institute of Allergy and Infectious Diseases (NIAID), whose scientists helped develop Moderna’s vaccine.

Mascola said both studies testing the Moderna vaccine against the South African variant are roughly in the “same ballpark.” It could be that antibody protection is high enough from the vaccine that it will still be effective, he said.

NIAID scientists are analyzing data from Moderna’s late-stage trial to see what level of neutralizing antibodies is required for protection. They are comparing individuals who were vaccinated but got sick anyway to vaccinated people who remained healthy.

It could take two months to complete this work, Mascola said. They hope to produce a benchmark for the minimum level of vaccine-induced antibodies needed to protect against COVID-19.

A global surveillance network is also needed to identify troubling new variants as they emerge, similar to one used to track fast-mutating flu viruses. That could cost tens to hundreds of millions of dollars in the United States alone.

Companies are waiting for the U.S. Food and Drug Administration to relay what testing will be needed for altered vaccines, said Phil Dormitzer, one of Pfizer’s top viral vaccine scientists. With influenza vaccines, companies can make changes without new trials. “But that’s after doing it for 50 years,” he said.

Peter Marks, who oversees the FDA’s vaccine approval process, has said small trials testing updated vaccines in around 400 participants may be needed at first. Even that could add months to the process.

Norman Baylor, chief executive of Biologics Consulting and a former FDA vaccines official, said the agency will lay out the regulatory road. But public health agencies like the U.S. Centers for Disease Control and Prevention and the World Health Organization would decide when vaccines should be updated, as with flu.

Like Moderna’s, it uses messenger RNA (mRNA) technology, which relies on synthetic genes that can be generated and manufactured in weeks.

He estimates the company could make a prototype version in a week or so, and take another two months to scale up and update their lab tests.

J&J, which is expected to release late-stage trial data on its vaccine within days, has laid the groundwork to address troubling virus changes, Chief Scientific Officer Paul Stoffels told Reuters. Its trial included sites in South Africa, which should give the company insight on that variant.

If a change is necessary, Stoffels said J&J likely would add a second strain into its existing vaccine.

We are looking at this with a lot of attention, he said.

Immune System’s T Cells Can Mount Attacks Against Many Targets On Coronavirus: Study