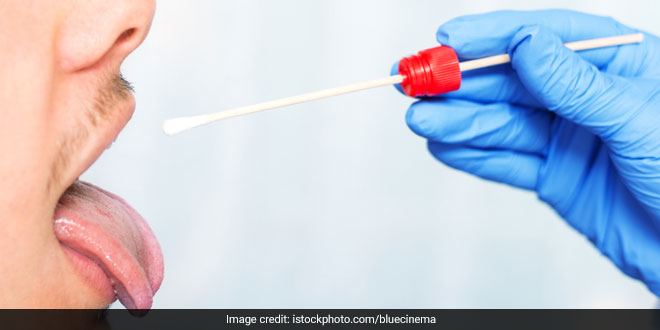 New Delhi: Out of total COVID-19 tests being conducted every day across the country, about 25-30 per cent tests comprise of rapid antigen tests, informed the union health ministry on Tuesday (August 4). So far, the Indian Council of Medical Research (ICMR) has reported over two crore tests, out of which 26.5 lakh tests are antigen tests. In the last 24 hours, ICMR has conducted over 6,61,892 covid19 tests. With more than two crore tests done till date, ICMR reports 15,119 tests per million (TPM).

When we started, antigen tests comprised only 5-6 per cent of the total tests being conducted in a single, but this proportion is consistently rising. Today, total antigen tests are nearly between 25-30 per cent tests of the total number of COVID-19 tests done so far, said ICMR Director-General Dr Balram Bhargava while addressing media on COVID-19 updates in India.

Dr Bhargava said that rapid antigen detection test has a very high specificity, i.e., its ability to detect true negative from 99.3 to 100 per cent. However, it has moderate sensitivity between 55 to 85 per cent.

This means that–about 45-15 per cent of the positive cases could be getting missed. And that is why we have reiterated in our advisory that if the person is symptomatic, the rapid antigen test results are negative then it should be followed by RT-PCR test to confirm the diagnosis, Mr Bhargava said.

When asked about what are chances of asymptomatic cases getting missed out, Bhargava said once the virus enters the body, it takes about five days for the person to manifest symptoms of fever. “From 0 day to 5 day, you may not have any symptoms. And that point of time, even the RT-PCR tests may be negative and even the antigen test is also negative. So that problem is there.”

Once I get the fever, then we expect the test will be positive whether it is by antigen test or RT-PCR test, from that perspective both are similar. From 0-5 day one may not have any symptoms and at that point of time even the RT-PCR and antigen test may be negative, he said.

Regarding the number of asymptomatic people and what percentage that varies and it ranges between 20 to 28 per cent, said Dr Bhargava pointed out a paper published in Indian Journal of Medical.

Our advisory is clearly saying that if they are symptomatic then the RT-PCR test would be positive and the chances of antigen test being positive are very high. If the antigen test is negative in an asymptomatic person, RT-PCR may also be negative in a large percentage. So you need to look for symptoms and if a person develops symptoms in next two-three days, a definitely a repeat RT-PCT test may be done.