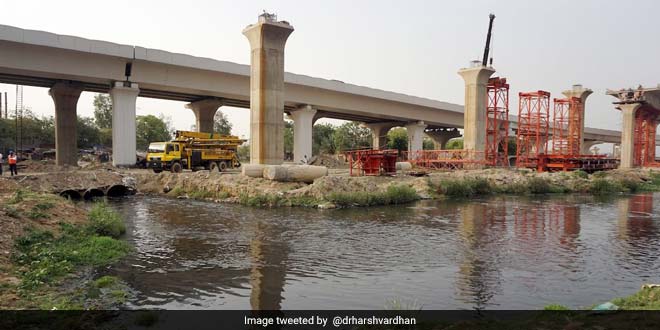 New Delhi: Union Minister Harsh Vardhan on May 9 said research would be done to work out a way to  use Barapullah drain water for various purposes including agriculture and industries. The science and technology minister said this after laying a foundation stone for a laboratory and a pilot treatment plant for cleaning of the Barapullah drain.

The initiative is part of Local Treatment of Urban Sewage Streams for Healthy Reuse (LOTUS) project, the deal for which was clinched in December last year between the ministry, Delhi Development Authority and the Kingdom of Netherlands.

Speaking to reporters, the minister said the purpose of the project was to recycle polluted water for various purposes.

River water is clean at its origin and eventually becomes polluted as it enters cities. Such facility would help us take up both fundamental and allied research to see if the water can be reused for industries, agriculture and construction, he said.

Lieutenant Governor of Delhi Anil Baijal and the Netherlands’ foreign affairs minister Bert Koenders were also present on the occasion.

Replying to question on other such similar projects which could not produce desired results, the minister said intervention on all steps is important.

We have to make sure effort is put in all angles to get desired results, Mr. Vardhan said.

Immediate goals of the project are to set up toilets which will be run by the treated water from the drain, said a release.

A bio-compost unit will also be set up as part of cleaning and beautification of the site, it said.

However, the final aim of the project will be to provide scalable potable water, it added.

The 12.5 km Barapullah drain near Sarai Kale Khan in the national capital contributes for 30 per cent of pollution to River Yamuna.

The project is expected to complete within 2022.