New Delhi: On Sunday, 45 robots came out in the field with a fast rotating ‘jhadu’ or scrubber and cleaned an area the size of badminton court to create a new Asian and Indian record for deploying the largest number of robots for sweeping an area. Yes, you heard it right! This is the innovation created by nearly 270 students OF IIT-Madras who participated in the Centre For Innovation (CFI) workshop.

The young innovators made 45 custom-designed robots that were controlled using Bluetooth via an Android-based application and were capable of sweeping an area of 750 square feet, that too in 15 minutes. 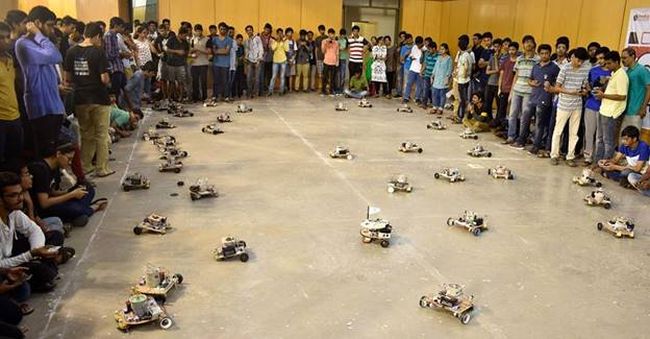 The working process is simple; each robot consists of a high-speed motor at its centre, with two rotating scrub-pads that directs the dust into the central suction mechanism, which is later collected by a filter in a vacuum tunnel. Experts from the institute claim that use of these Swachh robots can contribute to eradication of manual scavenging and also help replace humans in cleaning sewer waste.

The event was monitored by representatives of the Asia Book of Records and the India Book of Records, who later gave a provisional certificate as an award to the students after they successfully demonstrated how robots can be involved in India’s mega cleanliness campaign – the Swachh Bharat Abhiyan.

The final certification would follow after due validation and assessment of the record evidences.

Prof B Ravindran, CFI Faculty-in-Charge said, “This record is the latest in the list of achievements by the robotics groups. Robotics is one of the oldest co-curricular activities at IIT Madras. Through this initiative, we aim to sustain, spread and strengthen the concept of Swachh Bharat Abhiyan.”

313 Acres Of Land Given To Municipal Corporations For Waste Management: Delhi Development Authority

Churches Give A Push To Goa’s Plastic Free Dream, Asks Citizens To Avoid Plastic And Toxic Items On All Souls Day