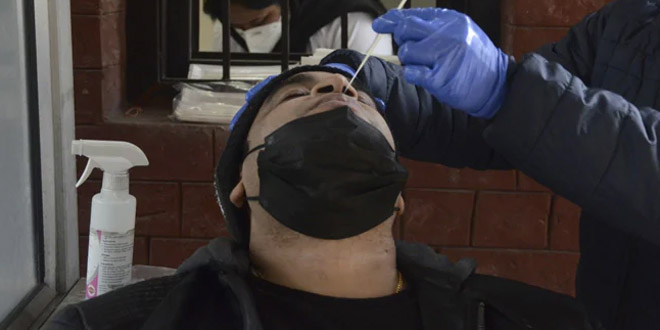 New Delhi: Smokers and vegetarians were found to have lower seropositivity indicating that they may be at a lesser risk of getting infected by coronavirus, according to a pan-India serosurvey conducted by the Council of Scientific and Industrial Research in its nearly 40 institutes. The survey also found that those with blood group ‘O’ may be less susceptible to the infection, while people with ‘B’ and ‘AB’ blood groups were at a higher risk.

For its study, the Council of Scientific and Industrial Research (CSIR) took samples of 10,427 adult individuals working in its laboratories or institutions and their family members, based on voluntary participation, to assess the presence of antibodies to SARS-CoV-2.

The study which was piloted by CSIR-Institute of Genomics and Integrative Biology (IGIB), Delhi said of the 10,427 individuals, 1,058 (10.14 per cent) had antibodies against SARS-CoV-2. A follow up on 346 seropositive individuals among the samples after three months revealed ‘stable’ to ‘higher’ antibody levels against SARS-CoV-2, but declining plasma activity for neutralising the virus, Shantanu Sengupta, senior scientist at IGIB and one of the co-authors of the paper said.

Our finding that smokers are less likely to be seropositive is the first report from the general population and part of growing evidence that despite COVID-19 being a respiratory disease, smoking may be protective, the study said.

The study found that higher seropositivity was found for those using public transport and with occupational responsibilities such as security, housekeeping personnel, non-smokers and non-vegetarians, Mr. Sengupta said.

In July last year, the Union Health Ministry had said smokers were likely to be more vulnerable to COVID-19 as smoking increases possibility of transmission of virus from hand to mouth, and warned that use of tobacco products could increase severity of respiratory infections and make people susceptible to coronavirus. In its document ‘COVID-19 Pandemic and Tobacco Use in India’, the ministry had said experts have confirmed that smokers were more likely to develop severe symptoms or die from COVID-19, as it primarily attacked the lungs and warned against use of any such products.

Smokers, it warned, were likely to be more vulnerable to COVID-19 as the act of smoking means that fingers (and possibly contaminated cigarettes) are in contact with lips which increased the possibility of transmission of virus from hand to mouth.

The presence of such antibodies is a reliable marker of infection and recovery. However, some infected people may not develop antibodies, Anurag Agrawal, IGIB director, and one of the co-authors of the paper said.

“Use of private transport, lower-exposure occupations, smoking, vegetarianism and ‘A’ or ‘O’ blood groups appeared to be protective, using seropositivity as a surrogate for infection,” the paper added.

Mr. Sengupta said this is for the first time that a study has been done in India wherein individuals have been monitored for three months (35 individuals) to six months (346 individuals) for antibodies including those with probable neutralising activity. This is the first such cohort survey, he said.

We conducted both the normal antibody test and neutralising anti-body test to understand the prevalence and duration of antibodies, he said.

The CSIR has some 40 institutes covering the length and the breadth of the country and each specialises in different fields. The IGIB and its sister institute Centre of Cellular and Molecular Biology have been at the forefront in conducting the genome sequencing of coronavirus.