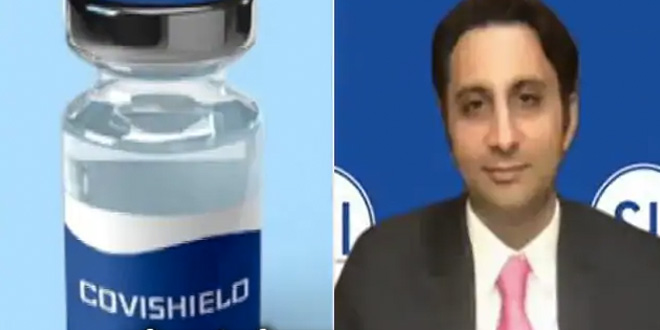 New Delhi: In a bid to expedite the process of the development and production of a safe and effective vaccine against COVID-19, the Serum Institute of India, the world’s largest vaccine manufacturer has started the mass manufacturing of a vaccine candidate developed by the University of Oxford in partnership with bio-pharmaceutical company AstraZeneca, even as the clinical trials underway. The data published in The Lancet medical journal on the first human trial of the vaccine candidate, ChAdOx1 nCoV-19, conducted on over 1,000 participants in hospitals in United Kingdom, exhibits promising results. According to Adar Poonawalla, CEO and Owner of Serum Institute of India (SII) that has partnered with UK researchers for producing the vaccine in the country, the Oxford vaccine will be called Covishield vaccine in India and could be launched in the country by November.

While speaking with NDTV, Mr. Poonawala said that the company is hopeful that the vaccine would help in ending the pandemic, even though the final results are yet to come. He said,

Oxford’s vaccine holds quite positive results so far. Also, the trials have been conducted a large safety study among over 1,000 people while other vaccine candidates like CanSino, Moderno have done trials on 40-60 patients in the phase-I.

The Phase-I trial results published in The Lancet on Monday said the vaccine did not prompt any serious side effects and triggered strong immune responses.

While the phase-I of the human trial of Oxford’s ChAdOx1 nCoV-19 vaccine also known as AZD1222 have shown positive results and the results for the phase-II trial are still awaited, the phase-III trial of the candidate vaccine has started in Brazil. M. Poonawala said to NDTV that phase-III trial of the vaccine may begin in India as well in the month of August, as the Serum Institute has submitted a proposal regarding the same to the Drugs Controller General of India (DCGI). He said,

We are submitting our proposal to DCGI to look at granting a trial to us based on the data coming from the Oxford trial. We are confident on getting on with the phase three trials in India in August. We forecast that it’ll take about two to two and a half months to complete, followed by another few weeks of review and in November, we hope to launch the vaccine if the trials are positive and the DCGI says it is safe and effective.

Mr. Poonawal further said that the vaccine will cost about Rs. 1,000 per dose and added as more volumes hit the market, the price may be reduced. However, he added that no citizen of the country will be paying for the vaccine as the government will be buying and distributing it among people for free of cost as a national necessity.

The company is planning to make around 200-250 million doses by December. Mr. Poonawala said,

We have invested more than $200 million in the production of the vaccine..in raw material, equipment and other things already to gear up to make the vaccine available soon, even though it is a big risk because if the clinical trials in the remaining phases do not get good results, the entire stock has to be destroyed.

He further added that the company has five other candidate vaccines and so it will be running phase-III trials with a new vaccine every three to four months. However, he said, as of now, they have maximum hope from Oxford’s product.

Mr. Poonawala clarified that even after the positive results from the trials, it is possible that the vaccine is not 100 per cent effective. He said,

If you look at all other vaccines, they’re normally 70 to 80 per cent effective. So maybe 2 out of 10 people may still get the disease.

Highlighting the importance of immunising the vulnerable population of the world, Mr. Poonawla said that half the stock of Covishield manufactured at the Serum Institute will be exported. He said,

Protecting our country first is seen as a patriotic duty, ultimately it will not work out in the country’s best interests. In the era of globalisation, health experts and economists have made it very clear that unless the whole globe is vaccinated and the vulnerable populations are protected, the fear factor will not allow factories and businesses to open everywhere, which means India, which is dependent on imports and exports, would also be affected if other countries are not able to get over the crisis.

According to Mr. Poonawala, considering the challenges related to logistics, training, awareness and misinformation, it could take at least two years to immunise all the people in the country. Mr. Poonawala asserted that the vaccine will be given to the most vulnerable groups first including the senior citizens, people with weak immunity due to underlying conditions like hypertension, healthcare workers on the frontline and corona warriors.

Over 1.60 Lakh Healthcare Facilities In Country Operating Without Permission: Central Pollution Control Board