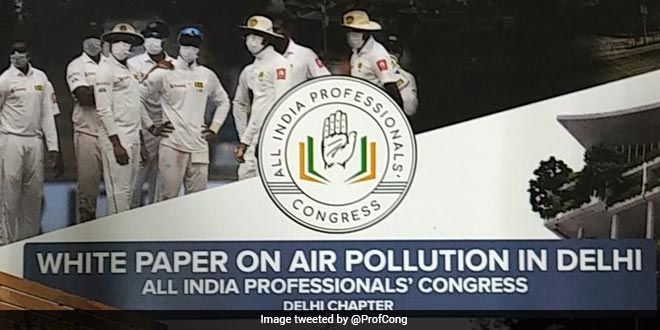 New Delhi: Delhi has the right to breathe clean air but neither the Centre nor the Delhi government was “doing enough” to promote that right, senior Congress leader and Member of Parliament Lok Sabha Shashi Tharoor said, as he launched a white paper on air pollution in the capital. Mr Tharoor, also cited the instance of the choking smog disrupting the third Test between Sri Lanka and India, saying it showed the severity of the pollution situation in the city. The “White Paper on Air Pollution in Delhi” has been prepared by the Delhi chapter of All India Professionals’ Congress (AIPC), which is headed by Mr Tharoor. Interacting with reporters at the Delhi Congress Office, the MP from Thiruvananthapuram said that ensuring clean air was a “fundamental responsibility” of any government.

Mr Tharoor, in his capacity as Member Parliament, had called a round table on the subject of pollution earlier this year, which included him, experts from AIIMS and others areas to create a nationwide action plan on air quality, he said. After deliberations, we had sent a letter to the environment minister, but sorry to say nothing much has happened, the Lok Sabha member alleged.

“We know that air pollution is a problem these days. The Delhi government is continuously working step by step to deal with the rising air pollution in the city,” Delhi Labour Minister Gopal Rai said.

In the white paper, the AIPC has suggested steps that can be taken to combat air pollution, which include strengthening  of public transport like the DTC bus fleet, use of electric buses, reduction in stubble burning, promotion of solar power. The AIPC is a political platform focused on the needs and aspirations of working professionals in the country, and to connect them to development process of the country.

Incidentally, the cover of the white paper carried an image from the India-Sri Lanka Test cricket match, showing the visiting team standing in the Feroz Shah Kotla Stadium, wearing masks.

We will be uploading a soft copy soon. This is the first policy paper by AIPC on #AirQuality. This paper is the result of collective contributions and consultations by AIPC fellows across the country. We thank @ProfCongDelhi for leading this effort #Professionals4Progress pic.twitter.com/gu4N5RTyxK

Air quality problem is not new here. We had faced a similar situation 20 years ago, when it was a team of Australia. And we responded with catalytic converter, CNG-driven buses to improve air quality, said Mr Tharoor.

The Congress leader also alluded to diplomats and foreign journalists facing health issues due to air quality. “The people need to take for granted that the air around them is fit to put into their lungs. Since Diwali, air quality has been terrible and so this white paper seeks to offer solutions, which governments can use,” he said.

“According to a World Bank study, the damage due to air pollution costs 8.5 percent of the total GDP. And, there is man-hour loss and money spent on healthcare. We are looking at a colossal inefficiency,” he said. Asked if he will raise the issue in the winter session of Parliament, Tharoor said, “I can certainly try.”

Air quality in Delhi worsened on December 4 and inched closer to the ‘severe’ category with a sharp rise in the level of particulates through the day, according to official data. A senior official of the Delhi chapter of the AIPC claimed that a petition had been filed in the Delhi High Court for implementation of a few measures to improve air quality.

Air Pollution Wiping Out The Health Benefits Of Walking: Study