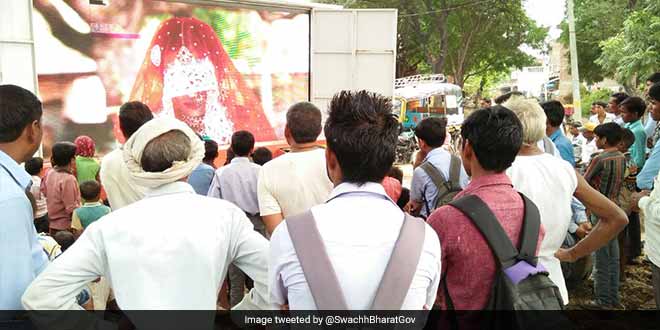 A year back, while several states were making steady progress towards becoming open defecation free (ODF) under the Swachh Bharat Abhiyan, Uttar Pradesh was lagging badly behind. With sanitation coverage of around 40 per cent, which was lower than the national average of 69.98 per cent, Uttar Pradesh, along with Bihar were the only two states which achieved negligible improvement under the Swachh Bharat Abhiyan. Things are finally looking up for the state, as it has managed to construct around 3.52 lakh toilets under the Swachhata Hi Seva campaign, that too within just 16 days.

Amidst this significant achievement for Uttar Pradesh, another addition to its list of achievements is that 1,605 villages near 25 Ganga bordering districts in the state have been declared ODF. In the districts of Shamli, Bijnor, Ghaziabad, Hapur, Meerut and Gautam Budhh Nagar, a total of 3,98,000 toilets have been constructed  and all of them have been declared ODF. All the villages on the Ganga border have been declared ODF, a significant achievement for the state. The plan to make villages along the Ganga ODF was supposed to be completed by December 2016, but floods in the state delayed the implementation of the plan, which is a joint venture by both the Swachh Bharat Abhiyan and the Namami Gange programme.

Uttar Pradesh’s progress in the Swachh Bharat Abhiyan in the last few months has been commendable. Since April 2017, the state has been constructing 15,000 toilets daily to meet its target of going completely ODF by October 2018. 6 districts have gone completely ODF, though efforts on a larger scale are required to ensure that all 75 districts of the state are ODF. Efforts seem to have been accelerated in the past few months, as Chief Minister Yogi Adityanath has stressed on the implementation of cleanliness efforts across the state.

The problem with villages situation near the Ganga was that many would openly defecate near the river, and the excreta would be eventually flow into the river, untreated. Making such villages ODF serves the purpose of both the Swachh Bharat mission and the Namami Gange programme, ensuring overall cleanliness in villages, said Indra Vikram Singh, District Magistrate, Shamli.

The state has also started spending on Information, Education and Communication (IEC) activities. The district administration of Agra on October 12 conducted an extensive campaign in some of Agra’s villages to make them aware of the ill effects of open defecation. Short films were displayed on large LED screens to teach villagers about how open defecation leads to the spread of diseases. The administration also arranged for short plays on the ills of open defecation, to spread the message using the trope of entertainment.

Though Uttar Pradesh has a long way to go before it achieves its ODF goals, as it needs nearly 1.5 crore toilets by 2018, the state has come a long way from its dismal sanitation days to give it some respectability in terms of the Swachh Bharat Abhiyan. With the villages near the Ganga basin already ODF, the target now for Uttar Pradesh will be to achieve the ODF status for as many of its 75 districts as possible, by October 2018.