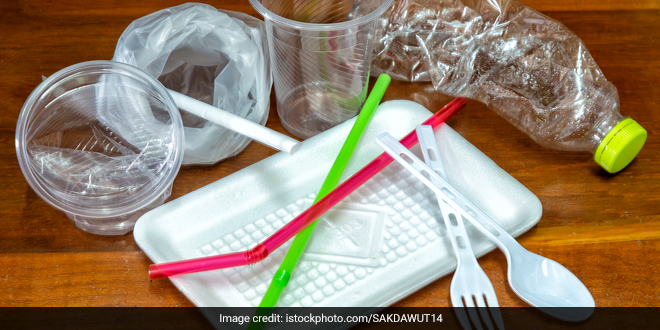 Street vendors and hawkers, especially those involved in the food business, are among the group who are largely dependent on single-use plastic

New Delhi: With the Centre all set to ban single-use plastic items from July 1, hawkers and street vendors have started switching to green alternatives while organisations representing them are holding awareness campaigns at regular intervals. The representatives of the National Hawker Federation (NHF) said they are holding meetings with street vendors and ensuring that they have stopped using items made of single-use plastic (SUP). However, they are concerned the vendors are unable to find many cost-effective alternatives and that is preventing them to go green.
In a notification by the Union environment ministry issued in February, all states and Union territories (UTs) were directed to phase out SUP items in a planned manner by July 1, 2022.

Street vendors and hawkers, especially those involved in the food business, are among the group who are largely dependent on single-use plastic. They use cheap disposable plates, cups, glasses, forks, spoons and straws to serve food.

Shaktiman Ghosh, General Secretary of NHF, said the body is mulling creating 10 model no-plastic cities across the country where hawkers and street vendors will completely give up using plastics.

We are planning to initiate a drive where 10 cities will be chosen and their vendors will be asked to not use plastic at all. Based on the success of this initiative, we will try to implement it everywhere, Mr Ghosh said.

However, he said, as long as there is no cost-effective alternative, vendors will not be able to switch completely.

We are trying to educate them, but the issue is that the available alternative is becoming too heavy on the pockets of the vendors. Moreover, the single-use plastics should be banned from the sources, so that it is not available for use. We all want to go green and stop using plastic items, but there is a dearth of alternatives, Mr Ghosh added.

Several vendors in Delhi are trying to adopt green alternatives and said they have switched to paper cups and tin foil serving bowls.

We have already switched to green alternatives. We have stopped using polythene, plastic cups, plates, spoons and forks. We have tried several alternatives in the past 15 days. We are facing a few issues like paper straws are not that effective. We have completely switched to a green alternative like tin foil. But it is quite expensive, said Ghanshyam, owner of a kiosk serving Chinese dishes.

Another vendor in East of Kailash, who sells ‘Rajma-Chawal’ said,

I used to serve food in plastic plates and for takeaways, I would use polythene. But now I have switched to tin foil bowls and have asked my regular customers to bring empty utensils from home for takeaways. They (tin foil bowls) are a little heavy on my pockets.

At regular intervals, we are holding awareness campaigns and running experiments like asking vendors to ask people to bring their plates and charge one rupee extra for paper plates. But the effectiveness of these experiments is still to be known, said Mr Verma.