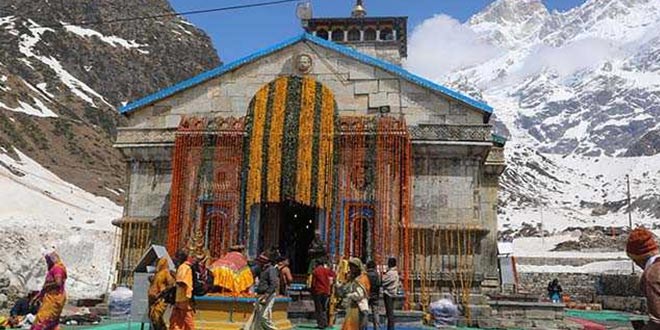 New Delhi: Cleanliness has historically been associated with divinity, and so religions worldwide have been advocates of cleanliness Since the launch of the Swachh Bharat Abhiyan, initiatives have been taken to instill cleanliness and proper waste management in some of India’s most iconic places of worship such as the Ajmer Sharif Dargah, Golden Temple, Mata Vaishno Devi Temple and several others, under the Swachh Iconic Places programme. Now the progrramme has been extended to Chhota Char Dham Yatra, the four holy sites of Yamunotri, Gangotri, Kedarnath and Badrinath. These places will see waste management implemented on a large scale.

From April 18, the shrines in Yamunotri and Gangotri will open their gates for devotees, while Kedarnath and Badrinath are scheduled to open on April 29 and 30 respectively. Polythene will be completely banned across the four Dhams. Tourists planning to visit these four places of worship will not be allowed to carry any polythene bags and shopkeepers in and around all four sites have also been notified not to sell goods in polythene bags. The Uttarakhand Tourism Development Board (UTDB) has come up with the regulations and apart from banning plastic, the board will also take steps to implement waste management.

Nearly 8 to 10 lakh people take the Chhota Char Dham Yatra every year and this results in largescale pollution not only in the four spots but throughout the route taken to cover the Char Dhams. This is why we have taken up a comprehensive programme to ensure that not only are the four holy spots clean but the waste generated around them is also managed properly, said Yogendra Kumar Gangwar, Deputy Director, Uttarakhand Tourism Development Board.

UTDB is also the coordinating body between the municipal corporations of the four holy sites. 218 temporary toilets have been constructed throughout the route for devotees to use, which will be cleaned by 234 sanitation workers, appointed via Sulabh International. The UTDB has allocated a sum of Rs 2 crore to the local municipalities for improving sanitation facilities. To ensure that tourists do not use plastic water bottles, the UTDB has installed 22 drinking water stations across the route.

Lack of toilets along the Chhota Char Dham route was a major problem for tourists but this year onwards, it will no longer be an issue. 218 temporary toilets have been constructed along the route and these will be cleaned daily by a workforce of more than 250 people. The waste will be transported to areas with a waste management plant and treated there, said Mr Gangwar

The local municipal bodies have also been asked to conduct regular cleanliness campaigns across the four tourist sites, once or twice every week. UTDB said that by cleaning the spots regularly, there would be lesser chances of waste accumulating rapidly. The UTDB is hoping that at least 150 to 200 tonnes of waste can be cleaned weekly from the four spots and in the coming weeks, all the four holy spots will be much cleaner than these have ever been.