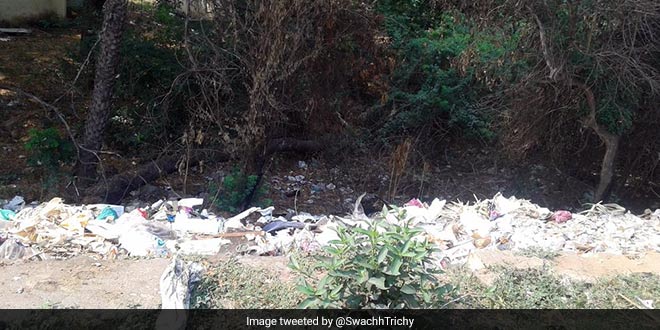 New Delhi: For 33-year-old Sheshadri Kumar Iyer, the Gandhi market adjacent to his house has been the go-to spot to dump garbage since childhood. The well-known market situated at Trichy remains one the city’s dirtiest places, with small mounds of vegetable and food waste strewn all around. Mr Iyer runs a local group of volunteers who clean some of the market premises on weekends and was mildly surprised when Trichy earned the cleanest city tag among all major cities from Tamil Nadu. A year later, Mr Iyer continues to question how Trichy managed to earn the cleanest city tag despite vegetable waste disposal still being a major problem.

While Trichy has done well to sensitise people to segregate waste and ensure that waste is collected regularly by the municipal corporation sanctioned waste collectors, vegetable waste collection and treatment remains an issue in the city. From Gandhi Market alone, up to 40 tonnes of vegetable and food waste is dumped alongside the road daily, making it highly difficult for commuters to travel across the area. Several residents like Mr Iyer have questioned the city’s ranking, given how a prominent area continues to be a hub of vegetable waste dumping.

Vegetable waste is still dumped on the roads by most of the shopkeepers in not only Gandhi market, but across some of the other markets in Trichy as well. The waste spreads diseases, germs and is an eyesore. A number of areas across the city have been cleaned by the local civic body, but they seem to be at loss when cleaning or managing vegetable waste, said Mr Iyer.

The Gandhi Market hosts over 300 shops. During festive days, the amount of waste goes up to 50 tonnes daily and eight vehicles assigned to remove vegetable waste from the market are not being able to deal with the quantum of waste that originates from the market. The Trichy Municipal Corporation, despite arranging for several programmes to sensitise shopkeepers on waste management, has not been able to convince majority of them to segregate waste or dispose it responsibly.

We have around eight vehicles scheduled to collect garbage from Gandhi Market and transport it to nearby waste treatment plants. The shopkeepers do not cooperate on any level with the municipal authorities and very few of them wait for the garbage collection vehicles to arrive and collect the garbage. Most of them keep throwing it on roadsides throughout the day. We are trying to convince them to handover the garbage to municipality sanctioned garbage collection vehicles, said S. Thirugnanam, Assistant Commissioner, Trichy Municipal Corporation.

Trichy ranked as the sixth cleanest city in India, but the problem of the municipal corporation’s inability to manage waste may hamper its ranking in this year’s Survekshan. In a recent meeting held in the first week of April between the Trichy Municipal Corporation and few local NGOs, it was discussed if the civic body will begin levying a fine of Rs 500 on shopkeepers who do not segregate and dispose waste on roads. For Trichy to retain or better its previous year’s ranking, stringent measures must be taken before the city’s residents’ efforts of remaining clean are undone by the ineptness of the city’s markets.