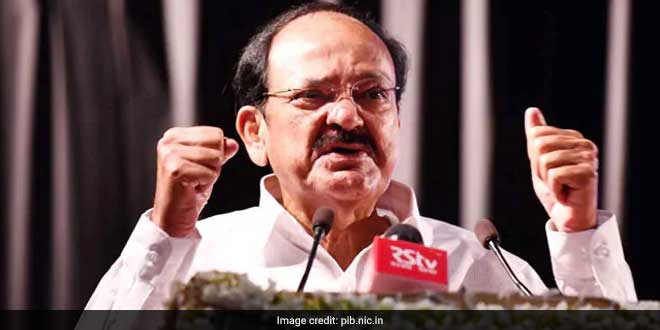 New Delhi: Vice President Venkaiah Naidu on Thursday stressed on the need of adopting shared mobility and electric vehicles to meet increasing demands of transportation and said standalone metro systems are not effective as they require a holistic approach. Delivering a keynote address at the launch of ‘Electric Mobility Forum’ of research organisation WRI India, Mr. Naidu also suggested for a comprehensive mobility plan to meet the need of cities for a period of 30-40 years. He said,

The forum, launched by the vice president, is aimed at revolutionising electric mobility in the country and accelerate the transition towards clean electric vehicles. Mr. Naidu, citing figures, said it took 70 years to build 60,000 petrol pumps in the country and viewed that building the ecosystem for electric vehicles will take time as around five lakh charging stations will be needed to power the clean vehicles.

Also Read: Push For Electric Vehicles: 131 EV Charging Stations To Be Installed In Delhi Within The Next Three Months

He termed climate change as the biggest challenge facing the earth, saying the best way to face it is to be friendly with the nature and live in harmony with it. Mr. Naidu said,

As we brace ourselves to cope with this challenge of climate change, we will have to marshal all our intelligence, knowledge, science and understanding of nature to do that

The air quality has been a matter of concern and every winter several parts of the country face ambient air quality that is extremely poor. This cannot be allowed to go on, he said,

We need to systematically identify the sources of the problem and deal with them. Otherwise this will adversely impact the health and well-being of city residents, especially our children.

Mr. Naidu also focused on the need of educating people and creating infrastructure for meeting the goals of providing adequate transportation facilities to the people while tackling the issue of pollution. He said while advocating move from private to public transport,

You have to educate people about the dangers of climate change, and create awareness about taking care of our surroundings.