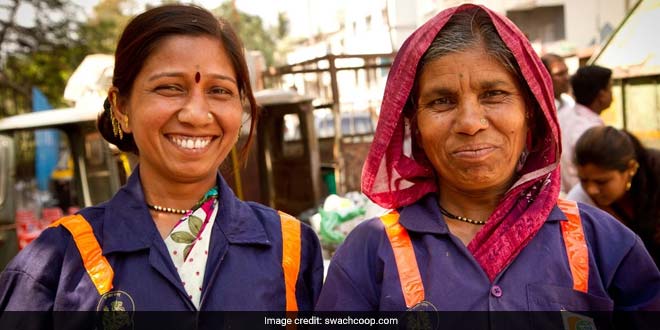 Mumbai: As the train would pull in and out of Pune Junction railway station, 38-year-old Kamala would jump onto the tracks in the hope of collecting enough waste material to feed her two children. She would collect almost everything from leftover food, discarded plastic bottles and polythenes and then sell it to the local kabadiwaala. For nearly four years she continued this cycle until one day when she finally found a new, formal route to carry out her job. But not every ragpicker, an important link to India’s waste management cycle, is fortunate like Kamala.

It is estimated that in India upto 4 million people work in the informal rag picking sector.  And because they work in an informal sector, they are not entitled to basic facilities like job security, income, or any health benefits/subsidies. Majority of waste pickers work in hazardous conditions and often get exposed to injuries, infections, respiratory and other diseases like tuberculosis. Additionally, sanitation problems like lack of clean water and access to toilets aggravates a ragpickers health.

But Kamala’s story is different. In her now improved life, she not only has a steady income but also leads a healthy and dignified life.  Like her, lives of thousands of ragpickers in Maharashtra’s Pune city is gradually improving. Around 3,000 waste pickers are a part of India’s first fully owned self-co-operative waste picking cooperative, SWaCH (Solid Waste Collection and Handling).

Also Read: A Simple Red Dot On Your Menstrual Waste Can Change A Sanitation Worker’s Life

The cooperative works in collaboration with the Pune Municipal Corporation (PMC) to provide a formal recognition to the work done by the ragpickers. SWaCH has eased the garbage collection process of the civic workers by providing a door- to-door waste collection service to nearly five lakh houses in Pune, covering almost 50 per cent of the city’s households. And the PMC in turn has given medical insurances to all the ragpickers who are a part of the organisation. This low-cost doorstep collection model has fulfilled the dual responsibilities of waste management and raising the standard of life for the ragpickers.

From conducting training campaigns on health, providing safety equipment to helping the ragpickers get medical benefits, here’s how the SWaCH is cutting down health risks that pose the in the daily lives of waste pickers:

Way before waste segregation was made mandatory by the centre as part of its Swachh Bharat Abhiyan in October 2017, the waste co-operative had initiated the awareness drive of waste segregation in the city, covering not only residential buildings but also one lakh households residing in slums. Regular awareness drives were organised to ease the process for the waste pickers. 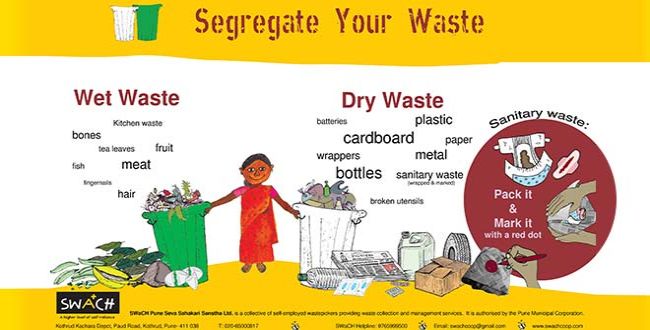 In the initial days of awareness drives, the waste pickers used to collect 6.5 lakh kilos of unsegregated garbage from the households. And either they would bring all the waste to the organisation’s centre or segregate the dry and wet waste in the building premises. From inhaling the toxic gases dripping from wet garbage, getting injured by sharp objects, to handling sanitary waste, the ragpickers were exposed to all kind of health hazards. Tube-lights break and emit JPN poisonous gases, batteries leach into the other waste and the chemicals cause harm to waste pickers. Nausea, vomiting, headache have become an integral part of their lives. This is when ironically it is the ragpickers who protect the rest from an unsanitised environment by picking up litter from public places.

Though not every household in Pune that the organisation covers practises waste segregation, a change is brewing slowly but steadily says Suchismita Pai, member of SWaCH. When compared to 2016 situation, the ragpickers now have to spend less time in segregation. Infact, Dhole-Patil ward of the city is nearing to the status of being a zero-waste ward. And this has in turn significantly reduced the health risks of ragpickers working in that area.

We have been instructed to collect only dry waste and process it for recycling. Wet waste which attracts vermin and insects and disease will now be processed at the waste generator’s end and composted in this ward. This makes for a healthier waste management system, says Shabeera Shaikh who has been working in the area for a decade now.

Imagine this: You are rummaging through mixed garbage and suddenly you end up holding a used sanitary napkin or a diaper. This is not only harmful for one’s health but it is also an assault on one’s dignity. While many casually discard their sanitary waste without giving much thought to it, it is the ragpickers who face the repercussions. The country is presently focussed on two-bin system segregation, but addressing menstrual waste is extremely vital as well. 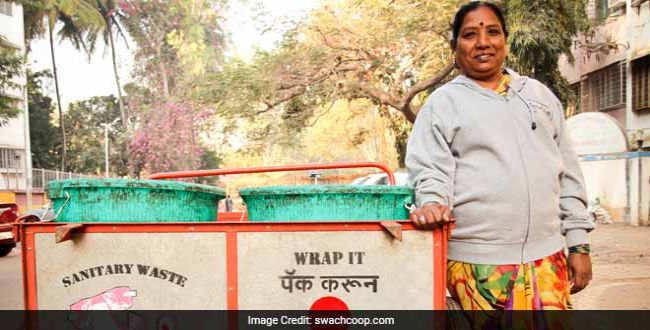 Pune’s waste-pickers handle about 20 thousand kilograms of dirty diapers and sanitary pads every day, exposing themselves to diseases like staphylococcus, hepatitis, e coli, salmonella and typhoid.

Last year the organisation came up with the red dot campaign where, the residents of Pune were asked to wrap up their sanitary pads and diapers in paper that was marked with a red dot. This would help workers to identify sanitary waste and treat it accordingly. To make it easier for the residents to dump sanitary waste in pushcarts, the carts were painted red. The SWaCH team also manufactures fifty thousand red-labelled bags per month and sells them for merely Rs.1.25 per bag as part of their campaign.

Malati Gadgil, who heads the campaign, tells us how many sanitary workers even lose the will to eat because of their work, “We all like to eat in clean surroundings and with clean utensils. You can hardly go from changing a diaper to eating right away even if it is your child. Imagine being faced with it every day.”

Over the last one year, the residents have come out and extended support to the campaign. The demand for red-labelled bags has increased along with an increase in red dots on newspapers.

In India, most of the ragpickers hand-pick the garbage irrespective of how unsafe the waste is. By striking a deal with the PMC, the ragpicker’s organisation has managed to procure safety gears including masks, gloves for the ragpickers. 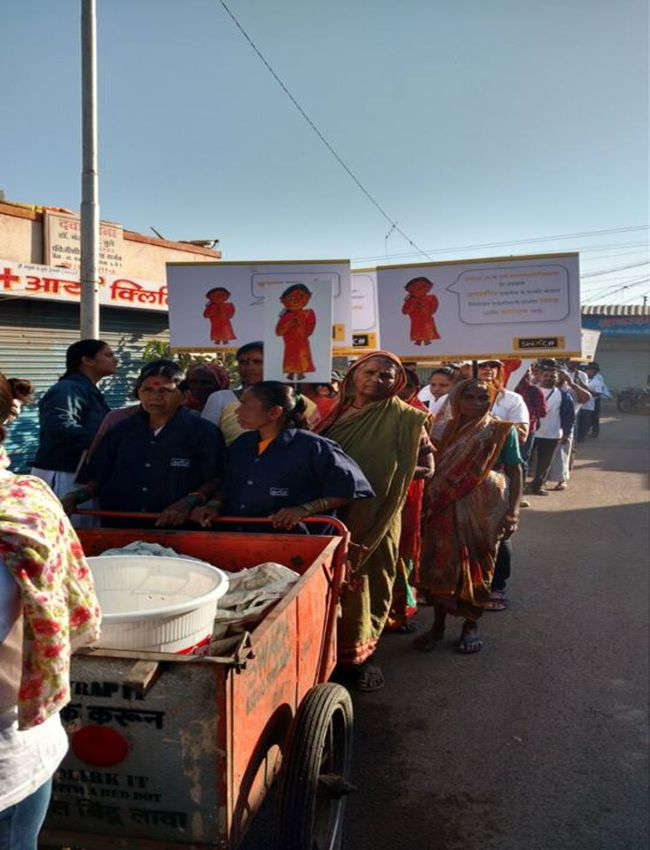 The push-carts will soon be redesigned keeping in mind the physical pain faced by the ragpickers. As the handles of the waste carts are low, the ragpickers develop severe back pains. Apart from that, the carts are too heavy and have sharp edges which often cause cuts and bruises to the person handling them. Hence, the organisation is working with the PMC to develop new carts.

Also Read: She Learned To Drive To Keep Her City Clean

The PMC even introduced an insurance scheme a few years ago titled ‘Mahatma Phule Jan Arogya Yojna’ under which the ragpickers can avail medical facilities. Incase of any health issues, a ragpicker can visit any of the government hospitals in the city and get treatment for free or at subsidised rate, depending on the problem.

Since most of the ragpickers hail from economically backward sections and are not educated or aware enough, it is common for them to ignore the small-time health problems like fever, cold, body pain, etc which can lead to prolonged diseases. Lack of clean water and toilet access are other drawbacks that further put their health at risk.

Mariavva Suresh Mallagi, a waste picker, who is also on the Board of SWaCH says

Like most people in the world, we commute to work everyday, but do not have ear-marked office spaces. So there is no drinking water unless we carry it ourselves and access to toilets and safe spaces that many take for granted is not so for us. This has adverse effects on our health, especially in the long term.

Also Read: World Health Day 2018: How Not Having Access To Safe Sanitation And Hygiene Is Killing Millions In India 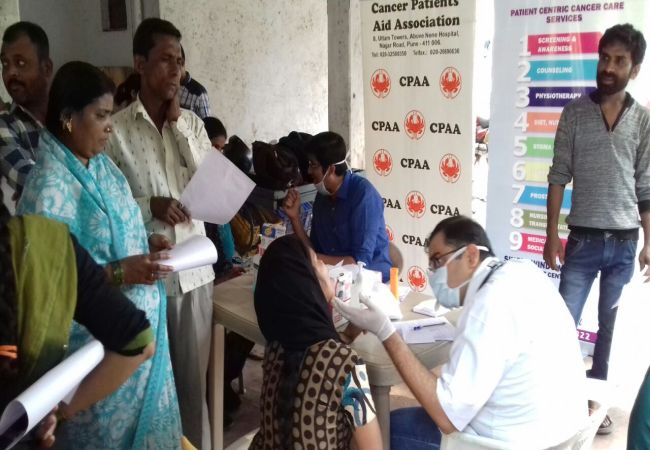 An average waste picker has no access to screening mechanisms for terminal illnesses like cancer, and the sheer inaccessibility and crowding of public health care systems and government hospitals leads to them neglecting many health issues, often till it is too late.

With an aim to break away from the existing structure, the organisation carries out monthly health camps or training sessions where they invite health experts. Through these camps they learn basic hygiene practices to be followed in everyday life. The cooperative had recently organised cancer screening tests for the workers in collaboration with local NGOs.

What Next For SWaCH:

The organisation is currently working to improve the health status in city’s slums. With an aim to cover every basti (slum) of the city, the organisation in collaboration with the PMC initiated slum waste management on a full scale in 2017. With steps like door-to-door garbage collection and waste segregation, the authorities have successfully managed to prioritise waste management in one lakh houses of the total 2 and a half lakhs till now. 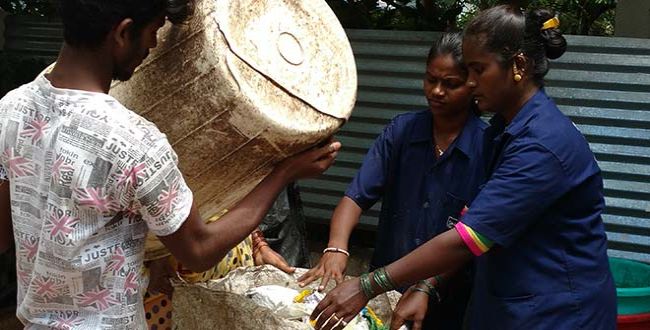 Also Read: World Health Day 2018: The Hidden Dangers In The Life Of People Without Toilets

How Clean Water, Sanitation and Awareness About Hygiene Can Save Lives Of Children In India

World Health Day 2018: A Number Of Indian Children Continue To Fall Prey To Malnutrition And Stunting, And Safe Sanitation Practices Could Rescue Them From Their Plight