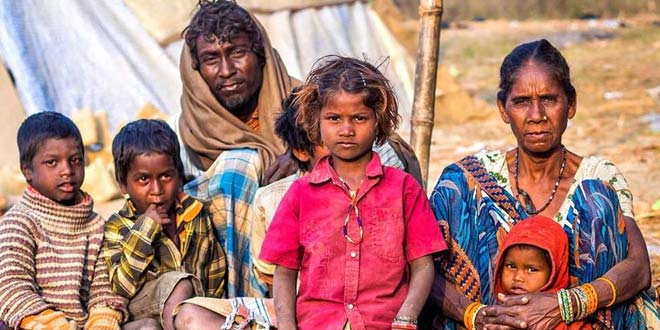 New Delhi: It was in October 2015, a year after the launch of the Swachh Bharat Abhiyan, a celebration event was held at Gujarat’s Kheda district. The event was held to celebrate the district’s success covering nearly 70 per cent of its homes with toilets A team of representatives from UNICEF India were present at the event and were taken aback by the number of malnourished and stunted local children, despite the district’s relative prosperity. What could the reason for many of Kheda’s children to remain malnourished despite intake of healthy food?

In 2012, a joint report by UNICEF, World Health Organization and World Bank attributed the lack of nutritious food the primary reason behind malnutrition affecting the health of millions of women and children across the globe. In 2016, four years post the release of the report, several officials from UNICEF and other notable organisations such as WHO and Red Cross have stated in various platforms that is sanitation a more probable cause of malnutrition in developing economies. Malnutrition and stunting (impaired growth of children due to poor nutrition and sanitation) in India is a recurring problem for the country’s children, 39 per cent of whom suffer from such ailments, as per a WaterAid report from 2016. The states of Uttar Pradesh, Bihar and Odisha account for some of the highest rates of malnutrition among children, and all these states have less than 60 per cent sanitation coverage. The correlation between the two has worried sanitation and health experts.

For years, it was accepted that lack of nutrition was the sole cause of stunting among children. But new research over the years has affirmed that THE lack of access to clean water and sanitation causes malnutrition and many states in India continue to be unable to provide children with basic water and sanitation facilities, said Dr Sanjiv Kumar Srivastav, School of Health Sciences, University of Delhi.

Though declining from 55 crore in 2014, the number of people defecating in the open is still at a high 20 crore, as per a survey conducted by the Ministry of Drinking Water and Sanitation in 2017. This puts numerous children at risk of malnutrition, as defecation near water sources pollutes water and its consumption can lead to stunting among children. Further, practices like open defecation also encourages the risk of not using a handwash or soap post defecation, resulting in spread of diseases contributing to malnutrition and stunting. The Global Nutrition Report of 2017 stated that though India has made some progress to reduce under five stunting among children, the country still holds the unfortunate record where one in three children under the age of five years is stunted.

It is imperative that the relationship between sanitation and malnutrition is established during sanitation campaigns, especially in rural areas, for people to understand how one is related to the other. The spree of building toilets is a tried and tested method of addressing sanitation problems, but experts feel that building toilets with a deadline based and numbers only approach, may not be a feasible solution to India’s malnutrition problem. 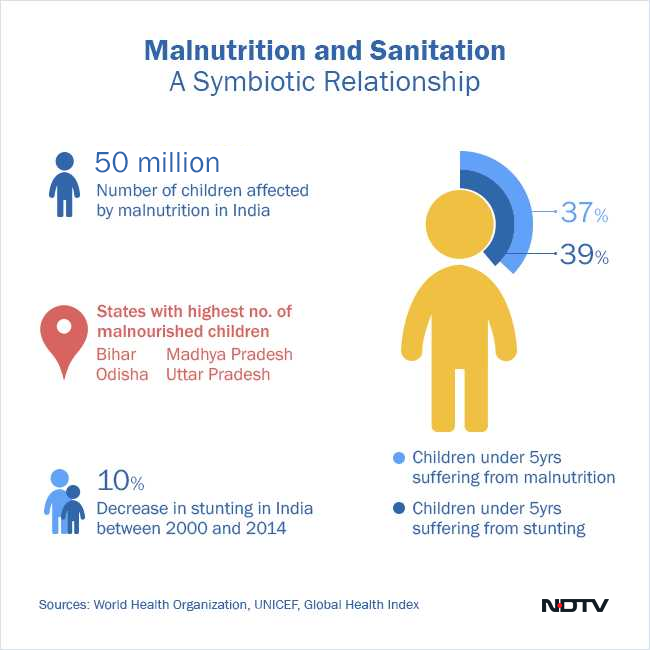 Over 50 million children in India suffer from malnutrition

Safe sanitation practices can curb malnutrition, but there needs to be a specific policy based approach for that. Along with building toilets, people must be trained and habituated to use them adequately, wash their hands post usage and the sewage from toilets must not enter water sources which are used for consumption. Failure to do any of these will result in malnutrition to persist, said Dipa Sinha of Right To Food Campaign.

While open defecation continues to decrease across the country, malnutrition continues to be a persistent problem, and experts fear this may be a result of not many adhering to safe sanitation practices. All is not look bleak for India though. Between 2000 and 2014, there has been a 10 per cent decrease in the stunting rate across India. Since 2014, ODF villages have demonstrated decrease in malnutrition and stunting rates, as stated recently by UNICEF.

In some of the villages which have been declared open defecation free, instances of malnutrition and stunting have decreased in the last four years, said Nicolas Osbert, Chief, Water, Sanitation and Hygiene Section, UNICEF.

For Swachh Bharat to translate into Swasth Bharat, push for toilet construction and meeting ODF targets needs to go hand in hand with educating people on the co-relation between health and good sanitation practices. Only then can India wipe out the dubious distinction of being home to half of the world’s undernourished children.