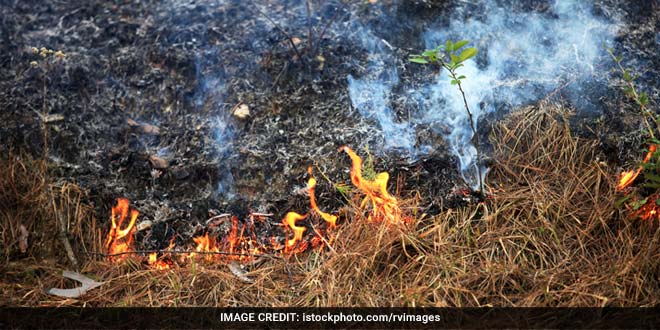 New Delhi: The air quality in Delhi and NCR worsened further on November 21 due to an increase in stubble burning in neighboring Punjab and Haryana despite the green court’s orders to the contrary. In the wake of deterioration in the air quality, the Delhi government issued an advisory to parents requesting them to restrict outdoor activities of children while environment agencies suggested wearing a mask. With an overall “very poor” air on November 21, the Air Quality Index (AQI) in some areas across Delhi-NCR- including Anand Vihar in east Delhi, Punjabi Bagh in west Delhi and Delhi Technical University (DTU) in north Delhi, and Ghaziabad- by evening was either “severe” or on the verge of slipping into “severe” category. According to weather analysts, due to the low-speed northwesterly winds entering the national capital from Punjab and Haryana, where stubble burning has almost doubled over the last two days according to the satellite images, the national capital and the surrounding regions are likely to inhale toxins for a few more days more.

They also warned of return of a brief spell of smog-like situation towards November 24-25.

While the meteorological reasons playing a spoilsport, satellite images from the National Aeronautics and Space Administration (NASA) on November 12 showed further stepping up of stubble burning in some parts of Haryana and almost all districts of Punjab, with maximum activity in Amritsar, Tarn Taran, Firozpur, Fazilka, Muktsar, Bathinda, Moga and Kapurthala districts.

These external emissions do have the impact on the air quality, though it’s difficult to access the percentage. Currently, with winds coming from that region, even though the number of incidents of stubble burning has gone down, the impact is there, A. Sudhakar, Member Secretary of the Central Pollution Control Board (CPCB) told IANS.

According to CPCB officials, while the local emission to external emission share could be 70 per cent and 30 per cent, respectively, this share differs as per the meteorological factors and could also cause the external factors to shoot up to 40 to 60 per cent or even more. With low wind speed, the chances of particle pollutants getting dissipated are less.

The situation is not clear, an official said.

According to the System of Air Quality and Weather Forecasting and Research (SAFAR), the air quality of Delhi-NCR is likely to worsen over the next three days, with share of the major pollutant — PM2.5 or particles in air with diameter less than 2.5mm (micrometers) — set to increase from present 146 units (Tuesday) to 155 on Wednesday and 174 units after three days.

The wind speed has fell since yesterday (Monday), and there is also an overall drop in the temperature. The north-westerly winds are cold and dry. As the wind speed is expected to drop further, there is a possibility of haze in Delhi, due to which pollution levels can rise around November 24 or 25, Mahesh Palawat, Director of private weather forecasting agency Skymet told IANS.

Major pollutant PM2.5 was recorded above the danger limit of 335 units on Tuesday in Delhi against 324 units on Monday — about 13 times the safe limit according to international standards, against 290 units on Sunday.

Vasundhara in Ghaziabad with an AQI of 400 points- considered “severe” (on a scale of 0 to 500) was the most polluted area across NCR, against 368 on Monday.