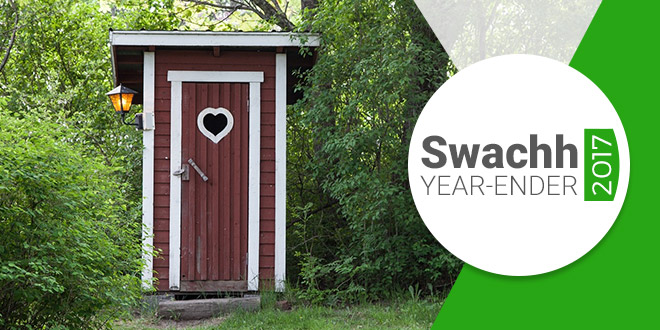 New Delhi: As 2017 draws to a close India hit some major milestones in terms of improving country’s sanitation coverage. Three years since the launch of Swachh Bharat Abhiyan, 2017 saw record number of toilets being built under the Abhiyan and national sanitation coverage hitting a record high of 74% up from 38.70% in 2014. This year more than 250 districts became open defecation free (ODF) up from 100 and 75 in the previous two years of the campaign. Here’s a look at the progress of Swachh Bharat Abhiyan in 2017 and the important milestones achieved in the year gone by.

Over 6 Crore Toilets Built Under Swachh Bharat Abhiyan So Far

The number of toilets built under Swachh Bharat Abhiyan rose to over 6 crore, marking significant improvement in India’s sanitation coverage in 2017. Under Swachh Bharat Gramin, the rural wing of the mission, over 5.6 crore individual household toilets (IHHLs) have been built by December 2017. In 2017 alone, 1.79 crore toilets have been built which is the second highest in a fiscal ever since Swachh Bharat Abhiyan was launched in 2014. Swachh Bharat Urban on the other hand, managed to construct little over 16 lakh IHHLs in 2017 which is more than 8 and 10 in 2015 and 2016 respectively.

Poor rural sanitation had long been the bane of India’s villages leading to open defecation being the norm. But things have undergone an optimistic change in the past few years. The rural sanitation coverage for India is now at 74.22 per cent, an increase of nearly 36 per cent from 38.70% in 2014, since the Abhiyan began. Over 2,93,000 villages and 256 districts have become ODF in India, which accounts for 45 per cent of India’s villages. 2017 saw several rural district administrations conducting campaigns, door-to-door awareness programmes and involving community members for toilet building exercises. Even in villages with uneven geographical terrain in states like Rajasthan and Madhya Pradesh, the district administration managed to construct toilets, which showed the resolve to solve the rural sanitation problem. Along with rough geographical terrain, villages like Rajasthan’s Dungarpur or Madhya Pradesh’s Orchha suffered from low water availability, making toilets a luxury for many. But 2017 saw water pipelines being installed in such villages and brought about much needed change in the sanitation scenario this year. 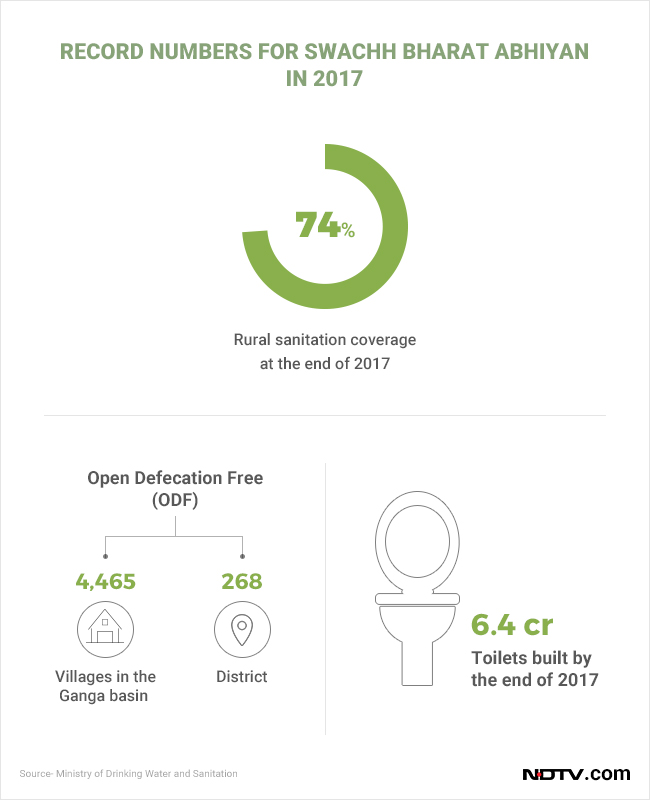 2017 saw some record numbers being achieved by Swachh Bharat Abhiyan

One of 2017’s biggest takeaways is the open defecation free status achieved by all 4,465 villages along the river Ganga, across the five states of Uttarakhand, Uttar Pradesh, Jharkhand, Bihar and West Bengal. Work on making all the villages in the Ganga basin ODF had begun in early 2017 but had to be halted midway due to floods in Uttar Pradesh and Bihar in May-June 2017. Despite roadblocks, the mission to make villages along the Ganga basin ODF was successfully completed by August 2017.

Across urban India, many Indian cities have attained the ODF status in 2017. This year saw Mumbai, the financial capital of the country become ODF with over 6,000 toilets built since 2014 and out of that 2,400 were built this year. Another significant city to go ODF  in August this year was Hyderabad. Here to out of the 8,000 toilets 3,178 were built this year. Overall, 2017 saw over 1,330 cities out of 4,041 number of cities go ODF, which is the highest successful for the Abhiyan since 2014. But for urban India to meet the deadline of October 2019 to go ODF, 60 lakh more toilets need to be constructed at the rate of almost 30 lakh toilets per year that is way above the average rate of 14 lakh toilets that urban India has been building toilets at, for the last two years.

In terms of the overall picture, rural regions of Uttarakhand and Haryana were declared ODF in June 2017. On the occasion of Gandhi Jayanti on October 2, President Ram Nath Kovind declared rural Gujarat ODF. On the urban front too, several states achieved the distinction of becoming open defecation free. These include Maharashtra, Madhya Pradesh, Jharkhand, Chhattisgarh, Andhra Pradesh and Haryana. With both rural and urban areas showing significant improvement in many states, 2017 was indeed an important year for Swachh Bharat Abhiyan. 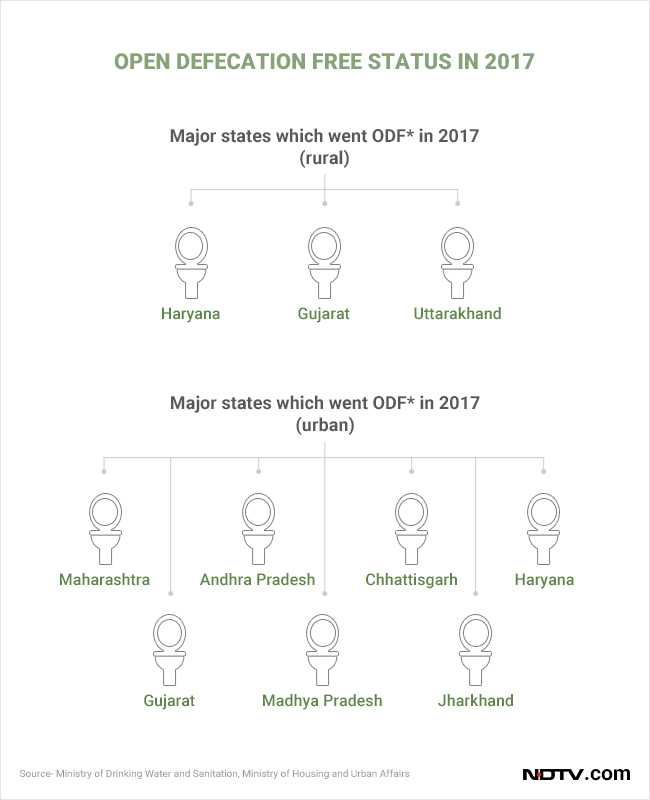 Many states attained the open defecation free status in 2017

Also Read: Uttarakhand Is The Fourth State In The Country To Become Open Defecation Free

The Next Big Challenge: Sustaining ODF

From gangs of children armed with whistles and drums in Indore and Ranchi to create awareness about why toilets are important, to the defiant women of Dungarpur in Rajasthan who defied tradition to come out and build toilets in their village, many tales of courage and determination emerged in 2017. As people came together for their basic right, access to a toilet, even the authorities stepped up the efforts to try and ensure toilets built are actually used. But alongwith the positives, some negatives too came to light in 2017 with allegations of coercions in Rajasthan, where the district administration said that people would not get ration supply if toilets were not built. In Bundelkhand, gun licenses were taken away from people who did not build toilets.

While coercion may push the Swachh agenda up to a point, behavioural change is what needs more investment to make the Swachh Bharat Abhiyan a greater success in 2018. States like Sikkim, Kerala and Haryana are working towards attaining the ODF+ status to ensure that not just ODF, but behavioural change becomes a crucial aspect of sanitation as well.